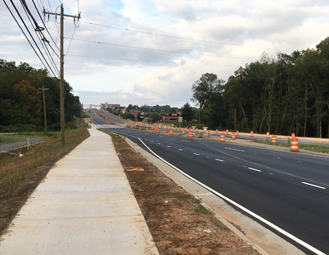 One done. One close. And one open. That’s the short take on two major road projects and a related greenway.

Construction is complete on the City Boulevard Extension Project and the road is now open to traffic, the city announced last week.  Improvements include a four-lane, median-divided roadway with curb and gutter, bicycle lanes, planting strips and sidewalks.

City Boulevard travel lanes will decrease from four lanes to two at Rumple Road.  This traffic pattern will be used until the NCDOT’s project is completed in 2017 and the tie-in can be made.

A temporary closure of two out of three lanes on the southbound North Tryon Street bridge over Mallard Creek may last until mid-November, the state Transportation Department says. The lane closure is necessary to strengthen the roadbed. On a positive note, the two-year project to replace two outdated bridges will be finished about the same time.

Each new bridge will have three lanes, a bike lane and sidewalk once the project is finished. The old bridges were two lanes and lacked both sidewalks and bike lanes.