Dozens of new shops, restaurants and services open or coming 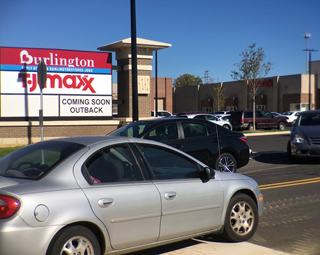 This has been a year of retail, dining and services growth for University City’s main business district, and much more is coming. Nearly 50 restaurants, shops, service businesses and recreational venues have opened or renovated since January or will open soon.

Many centers are fully leased or nearly so; and a new retail center, The Pointe at University Place, is close to leasing out its 37,000 sf.

For this report, we reviewed building permits and news reports, then drove through all of the retail centers along University City Boulevard and North Tryon Street.

Restaurants – 20 are open or coming, including local originals such as Fusion Cafe at Grande Promenade, Famous Toastery at University Place, Ale’s University at the Terraces at University Place and Appalachia Cookies at the Target center. Six restaurants including Five Guys Burgers, City Barbecue and Dunkin Donuts have signed leases at The Pointe, the new retail center going up on North Tryon Street near the Clay Boulevard transit station.

TGI Fridays recently completed a $350,000 renovation, while Showmars spent $250,000 to update its building.

Earlier this year, Waffle House opened a brand-new restaurant on the site of its previous one, built in the 1970s on North Tryon Street. The new building is beside the University City Boulevard transit-station parking deck.

Stores and services – 23 shops and services are open or coming. Belgate continues to attract national retailers, with the recent openings of TJ Maxx and Burlington Coat Factory in a showcase position on University City Boulevard at IKEA Boulevard.

Elsewhere, The Target Center is fully leased after adding the Habitat for Humanity Restore and national discounter Bargain Hunt.

Many small centers have been successful at attracting businesses that cater to UNC Charlotte’s 28,000 students and the many other residents of nearby apartment and condo communities. Among the new additions: Sleepy’s Mattresses (Belgate), My Bella Nails (Commons at Chancellor Park), and the Latino Community Credit Union.

Two of the new businesses are gyms, including the 60,000 sf Fitness Connection in part of the former Walmart at University Place.

Student housing growth both on and off campus is benefiting retail centers along University City Boulevard. East of campus, Boulevard 98 (formerly University House) and Millennium One have brought several hundred more students within a short walk of the Campus Station and University Plaza shopping centers.

Town Center Plaza near Harris Boulevard is getting a boost from both the 456-bed Circle University apartments on University City Boulevard and the growing South Village of student housing on the university campus.

New campus pedestrian crossing – South Village residents are finding it much easier to walk to Town Center Plaza as of this week, when a new traffic signal and pedestrian crosswalk began operating at the Cameron Boulevard-University City Boulevard entrance near South Village. A new walkway leads through the woods from the intersection to the campus housing area.

Three retail centers are under construction, and the owner of the former Walmart building, renamed University Plaza, has added four 2,000-sf spaces to its center.

University City Partners is working with the Charlotte Area Transit System to fill the spaces. Details

Conn’s Appliances and Fitness connection have moved into two of the three spaces in the original shell.

The next wave of new retail space will come with new residents, as well. Three mixed-use developments near North Tryon Street light-rail stations and two mixed-use centers on Mallard Creek Church Road near I-85 could add several hundred thousand sf of retail space, if built as proposed. Each project also includes hundreds of apartment homes.

North Tryon centers – Similarly, two transit-oriented mixed-use properties have been approved near the University City Boulevard station and parking deck. The University City Apartments, with 375 units, is under construction beside the I-85 entrance from North Tryon Street. Details

University City Partners is working with stakeholders and property owners around two stations to draft plans to guide development: