How sweet it is! Delish Cakery opens at University Place 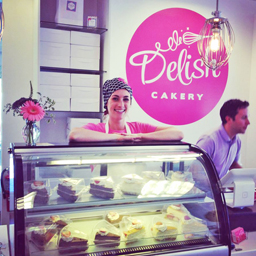 Opening day “was so crazy I had 8-10 people helping to keep up – my family, my boyfriend and his family,” says owner Aryn Keogh. “We had pretty crazy traffic. We had a lot of people wanting to come and support us,” Aryn says.

Aryn launched Delish Cakery out of her home kitchen in 2009. She has built a strong following with her fresh cupcakes, extravagant event cakes, French macarons and other treats. Many friends and followers came on Saturday to celebrate the young entrepreneur’s new bakery.

Aryn started planning the bakery a couple of years ago as the growing business strained her physical resources. She bought commercial equipment but had no room at home for it, much less the employees she needed to hire to help her handle the work. “I had much too much workload to maintain it from my house, and I just got to the point where it was ‘Go big or go home,’” she says.

The new location has plenty of room for the full bakery, new employees and a small restaurant so customers can sit and enjoy Delish Cakery’s many treats. These begin with the many varieties of gourmet cupcakes, baked fresh daily. “Once people try them they are addicted,” Aryn says. “And we make cheesecake that is awesome – not the kind where you cut any corners.”

Tempting photos of these treats and other Delish Cakery specialties like French Macarons, German Chocolate Cake and a stream of uniquely designed party cakes overflow on the store website and Instagram.com page.

Anyone who has started something big, especially a business, will appreciate what Aryn has gone through over the past few months with help from her parents, Chris and John Keogh, boyfriend Kevin Consolo and numerous small backers who invested in the project through a crowdfunding service.

“To get the store finally put together was a shock to us. It was a long, long time coming,” Aryn says. The first step after signing the lease was gutting the 1,000-square-foot space. “For a while it seemed like a pile of rubble, and I wondered what I had gotten myself into.”

Despite careful planning, the last week before the grand opening was frantic: “people stepping over everybody else, one guy painting, and one guy doing molding, and running wires and plumbing. It was definitely a madhouse!”

But Aryn has also enjoyed the little victories, “like the first time I turned the corner and saw the sign that had just been installed,” she says. And last week, as the painters finished. “The cosmetic stuff is what makes it seem real,” she adds.

And, of course, the customers coming to enjoy Delish Cakery’s fresh cupcakes, macarons and brownies.