Area Plan Update gets council OK – Next up, implementation 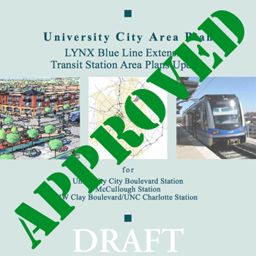 On Monday evening, Charlotte City Council unanimously approved the University City Area Plan Update as its guide for development along the LYNX light-rail line in University City. Work could start this summer on the next phase, which may include considering zoning changes on key properties close to three light-rail stations.

“The process for reviewing possible corrective rezoning or an overlay district will probably begin this summer,” said Planning Department staff member Mandy Vari, who has played a key role in the area plan update for the last two years. She said that the planning staff recently met with City Council’s Transportation Planning Committee to discuss the process of implementation.“We need to have a schedule to study whether corrective rezonings are needed or appropriate,” she said.

District 4 City Councilman Greg Phipps, who represents most of University City, serves on that council committee and said he is eager to get an implementation plan “mapped out sooner rather than later. We don’t want to wait too long and have everyone rush to the door to get their thing in place – more gas stations and drive-throughs on key parcels, at least.”

The University City Area Plan was created in 2007 and updated over the past two years to reshape University City’s light-rail corridor into a walkable urban center with multiple transportation modes. The plan calls for intense mixed-use development within a quarter mile of three stations serving University City – at University City Boulevard, McCullough Drive and J.W. Clay Boulevard.

The plan outlines certain public investments such as streets, bike lanes and pedestrian paths, but much of the change will be driven by private investment. The plan recommends zoning that will support the urban-style development, such as mid-rise buildings with multiple uses.

Many speakers at City Council’s public-comment meeting on April 13 urged the council to move quickly to change zoning near the future transit stations, before businesses put in non-transit supportive uses that are allowed under the current zoning. Much of North Tryon Street’s zoning reflects typical car-focused highway uses.

University City Partners submitted a request for the city staff recommend rezoning properties within a quarter mile of each station to include a Transit Supportive Overlay to their zoning. “Transit corridor activity is dramatically increasing in University City, and there is a growing sense of urgency,” said the letter from Executive Director Darlene Heater and Matt Browder, who chairs UCP’s Planning and Development Committee.

However, the area plan update that City Council approved on Monday did not include any zoning changes – a point that planning staff made at the start of the public-comment meeting and that Vari explained further this week. Area plans are policy guides, and that is what the council approved on Monday, she said. Implementation follows, and that is what the staff and City Council will work on next.

She said those discussions will likely begin with the staff reviewing with Transportation Planning Committee members the steps that are involved. The process will next look at what zoning is in place now, and how changes might affect property uses and owners’ plans. “

If we put certain zoning districts on a property, what does that mean for property owners? Will there be nonconformities (existing uses that will no longer be allowed if the owner seeks to make changes)? Will the property owners agree to that? Staff has heard from some property owners that don’t necessarily want the rezoning,” Vari said.

Once the staff and Transportation Planning Committee go through that process, any decisions to seek corrective rezonings will follow the same process as any rezoning – including the same staff and Planning Commission reviews, public hearing and council vote.

Want to see the final plan?

The Planning Department staff is making final changes to the plan as approved by the City Council on Monday. Vari said that the final documents should be available for download in about a month at http://UCAP.charlotteplanning.org