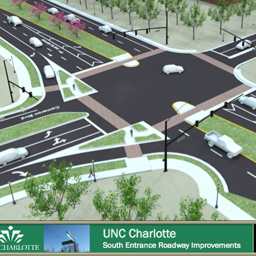 The first of several road improvements has begun at UNC Charlotte. Over the next 18 months, these projects will:

And by the way, the project starts are staggered to avoid adding to the campus traffic congestion.

Funding comes from several sources. Charlotte, the state and UNC Charlotte pooled $500,000 each to pay for the two entrance improvements. Several projects include bike lanes – an important feature since university planners say that there’s been a tremendous increase in bike use on campus in the last two years.

Phillips Road realignment – This project will eliminate UNC Charlotte’s mini-version of San Francisco – the tire-burning intersection of Phillips Road and Cameron Boulevard. Work started recently to reroute the road around the north side of the Halton-Wagner Tennis Complex near Toby Creek and have it flow into Craver Road where it currently ends at Cameron.

The new intersection will have a traffic signal. Construction will require a yearlong detour of Toby Creek Greenway that includes a steep climb to Richardson Stadium.

Greenway users will likely appreciate the end result, since a new bridge will carry busy Phillips Road over the greenway and eliminate the current sidewalk crossing. The project should be finished before the start of the 2015 football season.

Harris Boulevard turn lane at Alumni Way – Also next spring, work will begin on a “left-over” turn lane onto campus for traffic heading toward University City Boulevard on W.T. Harris Boulevard. Similar turn lanes have existed for a decade or more at entrances to Grande Promenade and CMC-University.

Cameron Boulevard-Mary Alexander Road intersection improvements – This key intersection will get a traffic signal and left-turn lanes. Work will start next fall after the Phillips Road project is finished.

Advance planning has begun for street improvements on the east side of campus. These might include a signalized intersection at Cameron Boulevard and John Kirk Road.