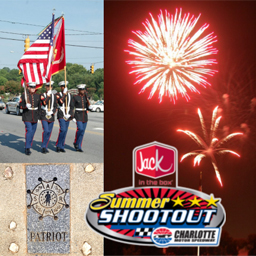 No one does July 4 celebrations better than University City. Remember our nation’s birth with:

Here are the details.

Tonight at Charlotte Motor Speedway, enjoy dozens of short races featuring Legends Cars and Bandoleros plus lots of other special events. Then celebrate the Fourth with a 15-minute “Huge Fireworks Extravaganza.” (You know they don’t do anything small at the speedway!) Grandstand gates open at 5; opening ceremonies are at 6:45; fireworks start about 10. Tickets are $7 per person; kids 13 and under get in free.

Harrisburg has so much fun with its July 4th celebration that the town needs three days this year to pack it all in! Start with the Miss July 4th Pageant, 6-9 p.m. July 2 at Hickory Ridge High School. Enjoy the festival with live music, food, rides and fireworks from 4-10 July 3 and 4-11:30 p.m. July 4 at the town park (191 Sims Parkway). Wave your flags proudly at the town’s July 4 parade down Hwy. 49 from 9-10:30 a.m. Friday morning.

Honor our fallen hero in the Battle of Charlotte

The Revolutionary War seems so long ago and far away. In fact, a bloody reminder of our ancestors’ great sacrifice and bravery stands quietly within a few yards of the I-85 exit to North Tryon Street.

On Sept. 26, 1780, the son of one our new nation’s founding fathers fell here to the swords of Tarleton’s Dragoons. Only hours before, Lt. George Locke, 20, of Salisbury and about 150 other Americans led by Col. William Davie defied the overwhelming might of British Lord Charles Cornwallis and his troops as they entered the upstate hamlet of Charlotte – just 20 houses and a courthouse clustered around Trade and Tryon streets.

An historical marker on South Tryon Street near Fourth Street tells what happened: The British “expected little or no resistance, but were met with a volley of musket fire from a small force. The British retreated, charged again and were driven back. British Lord Charles Cornwallis rallied the troops, and they advanced again. The British infantry was moving up to surround the Americans, who fired a third volley and withdrew.”

The British gave chase on horseback. “As the Battle of Charlotte spilled eastward on September 26, 1780, George Locke was among the small band of Patriots who fought defiantly against the overwhelming British army. He was cut to pieces by Tarleton’s dragoons and died near the site of the monument,” says another state historical document.

We tend to think of these early settlers as simple backwoodsmen – but that was hardly the case. Locke’s brother was a much honored lieutenant colonel in the colonial army. Their father served in the first Continental Congress in 1776 and eventually became a US Congressman in the 1790s.