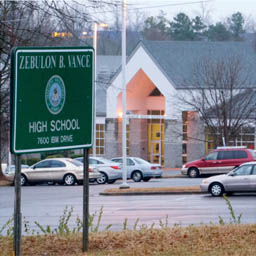 How can University City help 4,600 students excel? Nearly 100 business owners and residents invite you to help provide the answer. Their goal: Transform learning at the Governors Village of schools in URP. Their next step, on March 21: Pledge time, money and other resources to begin the transformation – and have your business make a pledge, too. A similar effort turned around Olympic High, says Governors Village advocate and business owner Rob Rogers, “and they don’t have anything like the resources we’ve got in University City.”

Rogers owns the Chick-fil-A franchise at University Place and has volunteered at local schools for many years. Each summer he sponsors a one-week day camp called Winshape for 400 kids. Through his school involvement, Rogers says he began to understand the special challenges facing teachers and administrators at Governors Village schools: Vance High, Martin Middle and Nathaniel Alexander and Morehead elementaries. Many students come from single-parent households, he said. Many families live below the poverty line. Many children struggle to learn. Rogers praised Charlotte-Mecklenburg Schools for equipping the schools with strong principals but says that the schools need major additional resources from our community to accelerate student learning.

That led him to organize a meeting on Jan. 31 for local business owners and others interested in helping. “I wanted to be a catalyst to ignite and coordinate our energies to help the very core of our community, which is Governors Village,” Rogers said. “There are 4,600 kids there, plus their families, who can be huge contributors to our community if we provide the right support.”

Ironically, Governors Village began in the 1990s as a visionary partnership between CMS, IBM and magnet-school families to provide the schools with IBM technology and parent volunteer time. That partnership soon ended, however.

Nearly 100 people representing two dozen businesses and community groups accepted Rogers’ invitation to “cast a vision and build a toolbox” of money, volunteers and other services for improving the Governors Village. “What I saw was how much power this thing can have if we can just get the right people at the table,” he said. To transform Governors Village will take many more businesses, he added.

The Jan. 31 meeting ended with the group agreeing to come back with concrete pledges of support and to invite other University City businesses to join them. “On 3-21, March 21, we will have the same resources back in the room plus anyone we can get to the table between now and then, and have a celebratory time,” Rogers said, as people from University City businesses and groups step forward and announce what “tool” they will put into the Governors Village toolbox.

Rogers hopes that some of those additional businesses will be among the biggest employers, with the most resources for helping Governors Village.

Rogers already has chosen his contributions for the coming year. The biggest will be a 5K run through the Governors Village on April 26. The event will honor Martha Nauman, a Governors Village teacher who became severely ill and nearly died last year. “We want to have 1,000 runners in this event to create a family experience that this community has been lacking,” Rogers said. “We want to create an atmosphere of hope that the heart of this community needs.”

Along with the event, Rogers plans to donate a 30-person High School Servant Leadership curriculum, student mentoring sessions as well as employment opportunities for qualified HS students at Chick-fil-A.

“But we are just one store,” he adds. “We are trying to use our store’s desire to be a light of encouragement in our community to stimulate other groups to come to the table as faithful stewards with their resources.”

To learn how your business or group can get involved, contact Rob Rogers at robrogers20@gmail.com.