Hate riding bikes near cars? This new path might help 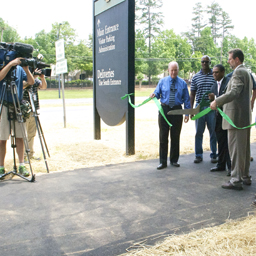 City and state staff and City Councilman Greg Phipps join in cutting the ribbon for the new bike and pedestrian path.

University City’s newest paved path could be a lifesaver AND a game changer. City and UNC Charlotte officials think so highly of the University City Boulevard multi-use path, they even held a ribbon cutting for it last week. For the first time, students can safely walk and bike to campus, businesses and apartments along one of Charlotte’s busiest roads. The path also signals a big change in Charlotte’s efforts to make us feel safer on bike and foot.

“Our Walkability Index has just gone through the roof,” joked District 4 City Council member Greg Phipps, as he joined city Transportation Director Danny Pleasant and UNC Charlotte Land-Use Director Peter Franz to dedicate the new multi-use path. Phipps, who lives nearby, said the new path will benefit students and others living in several hundred off-campus apartments. The 10-foot-wide path runs nearly a mile from the main campus to new student housing under construction at Mallard Creek Church Road. Franz said that bike riding on and near campus by students, staff and faculty has doubled in the past few years. Being able to walk and bike “is extremely important to students,” he said. Charlotte residents in general feel that way, too, Pleasant added. “We know that the public wants projects that help biking and walking,” he said. “People say it’s their No. 1 reason for choosing a house.”

A new feeling of safety

A wide grass strip separates bikes and pedestrians from vehicles

So what makes this new multi-use path transformative? For the first time in Charlotte, even casual bike riders should feel safe riding along a major highway. The new path’s design is Charlotte’s first attempt to deal with a painful truth: While Charlotte has added more than 70 miles of bike lanes to major streets like Prosperity Church Road, only about 5 percent of cyclists say they use them. Most others say they still don’t feel safe riding that close to cars. One solution being tried worldwide is to add physical separation such as barriers between cars and bikes. Our new path provides that safety with physical distance. For much of its length, the path sits 15 feet or more from the 30,000 vehicles a day traveling past UNC Charlotte. University resident and former Director of Facilities Planning at UNCC, Martin Zimmerman, points out that on heavily trafficked urban arterial streets where there is not the luxury to separate the bike path by a wide lawn, more and more U.S. cities are copying the European solution. It’s called a “cycletrack” or “buffered lane” where the design of the bikeway, while still technically part of the roadway, is physically raised from the roadway or otherwise separated from traffic by a row of bollards or similar physical buffer. CDOT is a member of NACTO, a new national organization spearheading the effort to overcome the safety limitations of bike lanes.

This is actually the first phase of a much longer network of mixed-use paths being planned across University City’s main business district. The next phase will extend the path to the Toby Creek Greenway crossing near East W.T. Harris Boulevard. Revisions to the University City Area Plan now being prepared for City Council review show the mixed-use path continuing up to North Tryon Street.

Also in the works – pedestrian crossings and campus signal

Walking and biking across University City Boulevard near campus should get easier in the next year or so. Pleasant and Franz said that the state transportation department has funded projects to add a signalized pedestrian-bike crossing midway between Suther Road and Kirk Road, and to add a signalized campus entrance for vehicles as well as bikes and pedestrians at Cameron Boulevard. The Cameron Boulevard entrance near the university’s growing South Village housing complex currently is right-out only, with no pedestrian crossing to the east side of University City Boulevard and nearby Town Center Plaza.