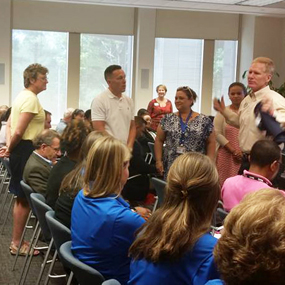 The message was clear and simple at the Aug. 14 standing-room-only pep rally by University City Connect: 4,600 Governors Village students need You. And You. And, well, all of us for them to excel.

“I can’t think of anything greater than what’s unfolding at Governors Village,” organizer Rob Rogers told the crowd. “We’ve all got to say, ‘I can help!’” (And if you love to organize, University City Connect needs your help NOW!)

Rogers, the owner of the University Place Chick-fil-A, is the heart and soul of University City Connect. He started the group to get area businesses, churches and community groups involved with helping students at Governors Village, a complex of four schools in University Research Park.

Launched in 1996 with the promise of intense parental and corporate involvement by IBM and other Research Park businesses, Governors Village lost its champion when former Supt. John Murphy left for a job elsewhere. Corporate involvement faded soon after.

What can I do that’s meaningful?

Rogers told the gathering that he began University City Connect after his epiphany five years ago while sitting in his restaurant and reflecting on whether life was about making yet another chicken sandwich, “or is there something more?”

“That got me thinking, is there something to make me excited to get out of bed tomorrow?” And the answer, he realized, was improving the schools that provided so many of his workers and customers. Surely there were others who felt as he did, he thought.

Like most movements, University City Connect took time to pick up steam. By last week, it appeared to be on fire, as did Rogers. “You know how I feel right now – besides feeling like jumping-out-of-my-skin excited?” Rogers asked the hundred people, many of them standing, who filled the TIAA-CREF meeting room to hear how they, their groups and their businesses could get involved.

Joining Rogers and actually exceeding his enthusiasm, given her usually reserved nature, was Charlotte-Mecklenburg Schools Supt. Ann Clark. Two decades ago, Supt. Murphy chose the 1994 National Principal of the Year to launch the Governors Village and serve as Vance High’s first principal.

“What we are doing today is the vision we had in 1995,” Clark told the group. “And now, this is our moment – an incredible moment for our kids!”

Clark used the event to announce a new CMS initiative to help students at the Governors Village and throughout Charlotte-Mecklenburg Schools. “All of our 18,000 employees have been invited to commit one hour, once a week, to one child,” she said, and she invited the audience to make the same commitment to students at Governors Village’s schools: John M. Morehead STEM Academy, Nathaniel Alexander Elementary, James Martin Middle and Zebulon B. Vance High.

She especially focused on students in grades 3, 7 and 12. Many third- and seventh-graders need one-on-one help with vitally important reading skills, she said. High-school seniors struggling to graduate may benefit from someone who cares enough to message them daily: “Are you out of bed? Are you at the bus stop? Are you in first-period class?” Clark said.

Needed now: Someone to coordinate the many

Rogers concluded the event with an invitation to take part in a small, important exercise. Look under your chair and you will find a sheet of paper bearing the names of two Vance High teachers, Rogers said. You’ll also find two cards. Please write a note welcoming each teacher back to school.

A few minutes later, Rogers asked everyone who had written the notes to hold them up. “What you just did would have taken me a week, and you did it in five minutes,” Rogers said. That’s the power of University City Connect.

The event ended promptly at 3 pm, as promised. After most of the crowd left, Rogers was asked what must happen next for University City Connect to move forward. “We have a lot of handles for people to grab,” he said. “Over the next 30 days, we need more ideas and more contacts. And we need a person to coordinate everything – someone with heart and organization.”