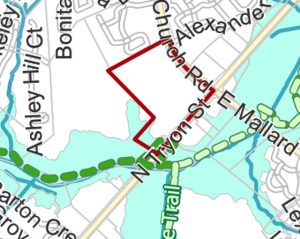 Novant Health has applied for a rezoning to allow a hospital or medical offices at North Tryon Street and Mallard Creek Church Road, the Charlotte Observer reports.

The plan calls for up to 144,000 square feet of surgery centers, clinic space, emergency rooms and/or other health uses on the 23.6-acre site, which is near UNC Charlotte and borders Mallard Creek Greenway and the Thornberry Apartments.

The site plan filed with the rezoning says buildings will be no more than four stories (65 feet). The facility will have entrances on both North Tryon Street and Mallard Creek Church Road.

A new public street will start at the Mallard Creek Church Road entrance and eventually extend into an undeveloped property at the northwest corner of the site.

The plan also calls for an urban open space at the Tryon-Mallard Creek Church Road intersection. The open space will include landscaping, walking paths, seating and other elements.

Atrium Health University City hospital and Urgent Care are located nearby. OrthoCarolina has offices and a surgical center across North Tryon Street from the proposed facility.