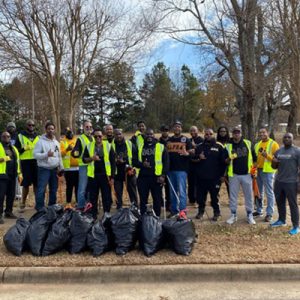 Once a quarter, if you’re driving on Neal Road, you’ll see a group of men picking up trash. These aren’t just any group of men. These are members of the Beta Nu Lambda Chapter of the Alpha Phi Alpha Fraternity. Previous members of the fraternity include Martin Luther King Jr., Thurgood Marshall, and Julius Chambers — leaders.

Alpha Phi Alpha chose Neal Road because of its close proximity to four schools, which produces heavy traffic. One of the schools is named after Julius Chambers who was a member of the Charlotte fraternity. The brothers wanted to make an active impact on the University community.

To this day, the fraternity is dedicated to service, scholarship, and leadership for both themselves and their community. With over 200+ members in the Charlotte chapter, they are able to cover a lot of ground and have a profound impact. Not only are they cleaning up the road they adopted, but they are also running voter registration events, supporting the homeless, and providing mentorship for young men.

James Burney, who has been a member of the fraternity for 37 years, says that for him being part of Beta Nu Lambda is “more about the footprints that we can leave on the lives and hearts of other people that we may touch.”

It’s not just about service hours for Beta Nu Lambda.

It’s about providing a safe space for those who don’t have one.

It’s about building strong values for those who grew up without them.

It’s about providing support so that people can chase their dreams.