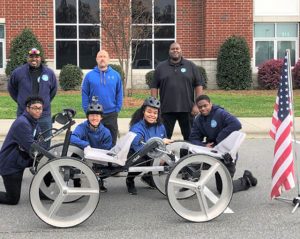 With an invitation from NASA and help from University City-based Vision Builder Adventures, five high-school students have completed an out-of-this-world challenge: to design, build and demonstrate a Human Exploration Rover.

Even better, our team took home one of nine awards presented for the best efforts of more than 80 US and international teams competing in the eight-month NASA 2021 Rover Challenge.

“The students and the adults were overjoyed,” says Johnny White of Vision Builders. “It truly was a community effort.”

Last year, Vision Builder took a large group of students to the NASA center in Alabama. This spring, a select team of students took on the ultimate project-based engineering challenge: to design, build and demonstrate a human-powered Rover that met NASA’s competition standards.

The Vision Builder team began working on the project in June 2020 with guidance from White and an advisory team from nearby businesses and the Schiele Museum’s Lynn Planetarium.

In previous years, Rover Challenge teams took an exciting trip to NASA’s center in Huntsville, Ala., for the final competition. The pandemic forced NASA and the teams to go virtual this time.

Instead of demonstrating their Rover on a NASA test site, each team videotaped their vehicle and two riders pedaling around a course that met NASA’s standards. The Vision Builders chose the demanding BMX Racetrack at Charlotte’s Hornet’s Nest Park.

“We knew testing there would be more difficult than anything we would encounter in the Challenge (at NASA’s Huntsville center). Our Testing Pilots (Jacob Kim and Marshall George) pushed the Rover to the limit,” White says.

And the envelope, please

On April 16 at McLean Road Baptist Church, Vision Builders team members, families and friends gathered in front of a monitor to watch the challenge results as they were live-streamed from NASA’s Huntsville center.

Teams from Colombia, Mexico and Huntsville’s University of Alabama took 1-2-3 in the college division. Teams from Dallas, Minnesota and India won the top three high-school spots.

The students spent a day at the museum’s Lynn Planetarium telling visitors about their Rover, the NASA challenge, and the Mars Rover. “Awesome event!” White says. “A whopping 465 patrons came through. Our students engaged and inspired the younger generations.”

White says that the large number of international teams taking part in the Rover Challenge makes it clear that, “Compared to the U.S., other countries are making serious strides in STEM (science, technology, engineering and math) careers.
“The Rover Challenge shows just how serious the world is about STEM. We have to get serious, in order to stay competitive.”

White hopes to take another team to the Rover Challenge in 2022. Students who will be high-school juniors and seniors next fall, and their parents, can get details at vbroverchallengeteam.com or by emailing Johnny White at visionbuilder@outlook.com.

Vision Builder is accepting applications for its TrySTEM Summer Program, June 1-11. The program introduces students to STEM project-based learning and helps prepare them to take part in programs such as the NASA Rover Challenge.

TrySTEM is for 10- to 14-year-olds. Participants will learn about robotics. Rocketry, aerodynamics, aviation and other science- and technology fields.