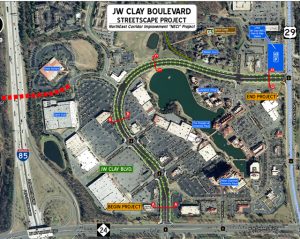 Construction of a major improvements to JW Clay Boulevard through University Place is expected to start in late summer of 2021.  The city-funded streetscape project will significantly improve this key artery for all modes of transportation, including pedestrian, bicycle, vehicle and transit.

New I-85 North Bridge and greenway also in the works 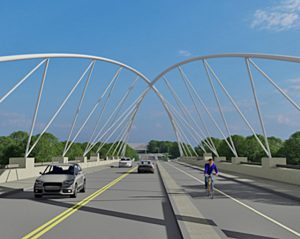 For the cycle path to reach University Research Park, it will need a bridge over I-85. The I-85 North Bridge, as it is called, will link Doug Mayes Place in University Place to David Taylor Drive in the Research Park. Construction on the bridge is expected to start in spring 2021.
Meanwhile, Mecklenburg County is nearing completion on the long-awaited Barton Creek Greenway from JW Clay Boulevard to the Mallard Creek Greenway. Once the new greenway opens, University Place will have direct access to 9-plus miles of greenways through UNC Charlotte, University Research Park and several neighborhoods.

The city and county projects coincide with a major private transformation of 20 acres of 1990s shops along the lake at University Place.
Developer EB Arrow expects to begin work this spring on the first phase of Waters Edge, which will include a 182,000-square foot office building near the main bridge; a 2.5-acre linear waterfront park; and more than 300 apartments. The developer also is negotiating with the Charlotte Mecklenburg Library on possibly relocating the University City Regional Library into a two-story space along the waterfront.