Major employer leases half of office building near LYNX 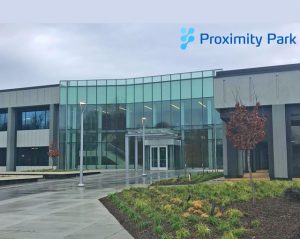 The office building has received more than $8 million in renovations, including a new entrance.

One of University City’s first office buildings has officially been reborn with the announcement on Jan. 14 that Principal Financial Group will occupy more than half of Proximity Park, at 401 McCullough Drive.

Built in 1973 and renovated over the past year by new owner Tempus Realty Partners, the three-story office building holds about 205,000 square feet of space.

Principal Financial Group, a major investment management and insurance company, will occupy the full third floor and part of the second floor, the Charlotte Business Journal reports. The company plans to begin moving in next summer.

Based on industry averages, the 106,000 square feet of office space leased by Principal could accommodate roughly 600 people.

Proximity Park is situated on a 32-acre campus beside I-85. Allstate had its Charlotte offices there until relocating to Innovation Park, the former IBM facility that now houses several major Charlotte employers.

Tempus Realty Partners bought the property in 2017 and has spent more than $8 million on renovations. Colliers International is handling leasing.

A big selling point is the property’s easy access to Uptown Charlotte via both I-85 and the LYNX light-rail line.

Marketing materials say that the McCullough Drive LYNX Station on North Tryon Street is just a 7-minute, half-mile walk away.

The property also has abundant parking and room for a second building.

Click on the photo to view the Proximity Park marketing video