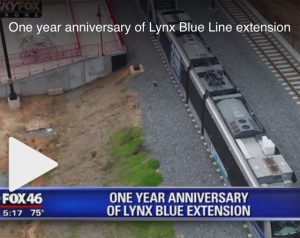 You can spend days looking at online videos about the Charlotte LYNX Blue Line, posted by casual riders, CATS and several businesses. In honor of the March 16 first anniversary of the LYNX Blue Line Extension, we compiled this list of videos that appealed to us. We hope you enjoy them.

FOX News offers this brief report on our LYNX line after one year of operation. WATCH

First Day Opening Ceremony And First Ride
A young person wearing a Charlotte 49ers sweatshirt narrates this shot-on-a-smart-phone video of the first day ceremony at UNC Charlotte, plus her first ride on the LYNX. 3,375 views so far. WATCH

How To Ride the LYNX
If you haven’t taken a trip yet, this video from the Charlotte Area Transit System will be helpful. 4,241 views. WATCH

The 58 Millionth Rider On The LYNX Blue Line

On Thursday, March 14, CATS CEO John Lewis greeted Mark Helotie as he debarked from a LYNX train in uptown Charlotte and proclaimed Helotie the 58 millionth passenger since the LYNX began operation in 2007. Helotie was pleasantly surprised. “It’s amazing there have been 58 million riders,” said Helotie, who began riding the LYNX when he moved to Charlotte eight years ago. We agree. 58 million? Amazing, indeed! WATCH

Full Ride From I-85 South To UNC Charlotte Main Station

If you’ve never ridden the entire length of LYNX Blue Line and want to experience it, this video may be for you. Just know that the ride takes just under an hour! Posted on March 5, 2019. WATCH

This may be the most viewed video about the LYNX BLE on YouTube, with more than 17,000 views. By speeding up the video, viewers can experience the 9.1 mile ride in just 4.5 minutes and see it from the driver’s seat. You’ll get a few facts about each station along the way, too. Posted Sept. 14, 2017. WATCH

Here’s a recent view of the ride. About half of the footage was taken from the driver’s area and offers a unique sense of the hills that the train climbs to get over intersections along North Tryon Street. 417 views. Posted Jan. 10, 2019. WATCH

The popularity of Charlotte’s LYNX continues to grow and now reaches into neighboring counties, as this recent WCNC news video explains. CATS has announced plans to build a Silver Line from Matthews to Belmont in Gaston County, with the goal of beginning operation in 2030. By comparison, the original Blue Line took 19 years to go from initial task force to start of service. 2.5 minutes. 132 views. WATCH