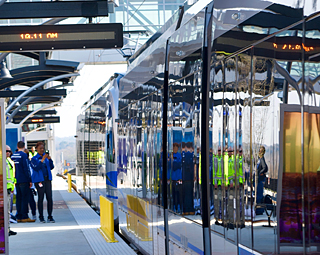 That effort has paid off. A check of police calls for the past six months finds virtually no reports of criminal activity at University City’s North Tryon Street three transit stations and two parking decks.

University City Partners recently spoke with BJ Johnson, with CATS Safety and Security, about its extensive security program for the 19-mile LYNX Blue Line in general and for University City stations and decks in particular.

Johnson emphasized that safety is a partnership between CATS, police and riders.

“All are responsible for security,” Johnson said, “so we at CATS and the police do our part, and we encourage patrons to do their part.”

Charlotte Mecklenburg Police have more than 80 uniformed and plain-clothes officers patrolling the line 24 hours a day. CATS has its own private security company patrolling. as well, and the Mecklenburg County Sheriff’s Department also helps.

Officers regularly monitor the system, whether by riding trains, patrolling stations and parking decks or observing the system remotely. Many officers are in uniform, while others may be in plain clothes and riding in the seat next to another LYNX passenger.

Police monitor the cameras, phones and buttons and can dispatch help immediately.

Shrubs and trees are cleared near park-and-ride lots to improve visibility.

Riders play a big part in keeping themselves and others safe, Johnson said. The first step in a safe trip is for riders to monitor their location, whether in a parking lot, at the station platform or on board the train.

“This is like getting in and out of your car,” Johnson said. “Always scan, and if you don’t feel safe, contact the police by cell phone, blue-light phone or call button.
When you see or even suspect that something is wrong, “Call it in and let us respond, even if you think it is nothing,” she said.

Along with blue-light phones and emergency call buttons, riders can call 911 or use a special smart-phone app called CATS See Say.

See Something, Say Something with new CATS app

The simply designed app has a single page where people can write a short note about the problem, snap a photo (without flash), select the location of the problem, and submit it anonymously, if they prefer.

People have used the app to report everything from overflowing trash cans to suspicious bags left unattended.

Johnson said that the app is a good alternative for reporting suspicious behavior without appearing to be calling 911. Yet the police will still respond immediately, she added.

“The app is monitored by Police Dispatch 24/7,” Johnson said. “If an individual uses the app, a certified police dispatcher will get the alert, acknowledge that they have received the alert, and immediately send an officer to investigate, no matter what it is.”

The app is available for both iPhones via the App Store and Android phones via Google Play. Search for CATS See Say.