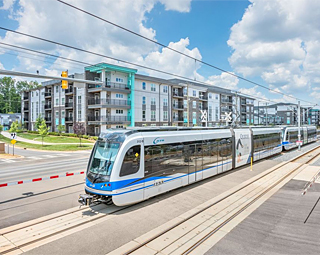 The awards were announced on Nov. 1 at the business publication’s fifth annual event honoring commercial real-estate projects completed in the past year in the Charlotte region.

The 377-unit apartment community was the first transit-oriented development along the 9.3-mile Blue Line Extension between uptown and UNC Charlotte, the Business Journal noted. MORE

Corvian Community School won in the Public/Civic/Community category for creating a building “for the next generation.”

The 70,000-square-foot high school has many notable features besides classrooms, the Business Journal noted.

These include innovation labs for robotics, a yoga and dance studio, a black-box theater and other learning and collaborative spaces. MORE

The Business Journal honored Furman for being “a pioneer and leader in creative, cool and funky real estate projects — primarily in the residential space but more recently in commercial and mixed-use deals in South End and uptown — as well as a civic leader.” MORE