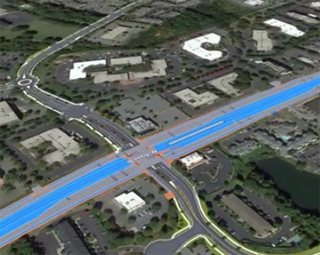 Charlotte voters gave strong approval of $223 million in general obligation bonds on Tuesday that will fund major improvements in University City as well as the rest of Charlotte.

Nearly $40 million will go just to continue improvements to streets, sidewalks and intersections along the LYNX Blue Line Extension, including a new bridge linking the University Research Park to the JW Clay Boulevard light-rail station.

Here is the run-down of what voters approved and how University City will benefit.

The bonds will fund street and intersection projects, continued development of the Cross Charlotte Trail, upgrades to Charlotte’s traffic control system, pedestrian safety improvements, and repairs or construction of bridges, sidewalks and bikeways.

In University City, about $27 million will go to ongoing improvements of streets, sidewalks and intersections along the Northeast Corridor that includes the LYNX Blue Line Extension.

Previous bond packages in 2014 and 2016, plus a planned bond package in 2020, will provide a total of $106.6 million in improvements along the Northeast Corridor from uptown to University City.

The total project will cost more than $25 million, including money approved by voters in 2014 and 2016. Construction is expected to start in 2020. GET DETAILS.

The 30-mile Cross Charlotte Trail project will receive another $5 million to go with the $30 million approved by voters in 2014 and 2016 bond drives.

When completed in the next decade, the paved path for pedestrians and cyclists will run from University City to Pineville via UNC Charlotte, NoDa, Uptown and southeast Charlotte. Toby Creek and Mallard Creek greenways will be part of the completed Cross Charlotte Trail. GET DETAILS

Housing bonds fund the city’s Housing Diversity Program. This money is matched with private investment dollars to provide affordable and well-maintained housing for low- and moderate-income individuals and throughout Charlotte.

The Housing Diversity Program not only addresses the need for new construction; it also helps preserve existing housing through rehabilitation of both single and multifamily housing units.

In University City, some of bond money approved this week will go for continued improvements to the Prosperity Village community along I-485. LEARN ABOUT THE PROSPERITY VILLAGE PLAN

The city recently released an update on seven projects underway along the Blue Line Extension to improve connectivity between stations and nearby communities, whether traveling on foot, on bike or in a motor vehicle. Click here to view the report, published on Oct. 23.