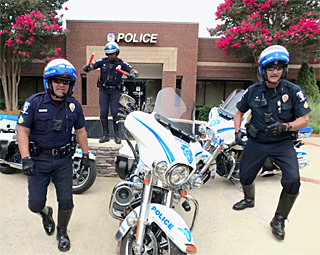 University City police, locations and even Chick-Fil-A’s Rob Rogers figure prominently in several scenes – and that’s not a coincidence: Two of the University Division’s community coordinators, Chad Webster and Jason Peetz, helped lead the effort and oversee the filming.

Chief Putney gets the opening shot, but right after that you’ll spot Webster and Peetz at one of their favorite hangouts, the University Place Chick-fil-A; motorcycle patrol officers dancing in front of the University City Station at University Executive Park; and Webster crooning, “Nowhere to hide when I’m getting you close,” as he pulls an imaginary lasso that leads him Rogers in a feigned traffic stop.

Of course, lots of other Charlotte locales and even Lake Norman also get into the act.

Local media have given the Lip Sync video plenty of coverage, including Interviews of Webster, Peetz and officer Darrion Eichelberger by WBTV.

Though the people in the video appear to be dancing and “sync’ing” with gusto, Peetz told WBTV, it took a lot for most officers to do.

“I think everybody understood the bigger picture – that humanizing the badge is a big thing,” Peetz said.

The video hit a home run, getting 70,000 views its first day and more than 5,200 comments in the three weeks since its release. Almost all are like this sample:

Watch the video – and many others!

Sample the hundreds of entries flooding YouTube, including top entries from Seattle and Pickens County, Ga.

Seattle’s entry will blow you away, performed by a cast of hundreds, to what must be Seattle’s Hip Hop anthem, “Downtown.”

Before you watch the totally different and moving Pickens County Sheriff’s Department entry, read USA Today’s news article about it. When you watch, be prepared for tears.