Remembering one of University City’s pioneers 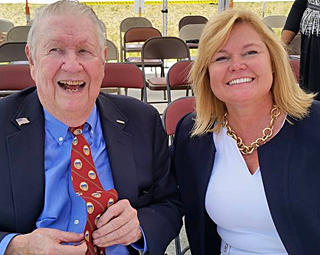 Rusty Goode with Darlene Heater at the opening of I-485 through University City.

University City lost one of its true pioneers recently. Seddon “Rusty” Goode Jr. died on May 14 at the age of 86.

Goode helped launch University Research Park and complete I-485, and much more.

“He held tight to the vision he and other civic leaders created for Charlotte’s University campus and business community.

Although his legacy encompasses so much more than University City and University Research Park, our community is blessed beyond measure to have captured his passion and commitment to this place for several decades.”

Goode served as president and director of University Research Park for two decades, starting with the arrival of IBM in the early 1980s and the explosive growth of the park that followed.

As a member the powerful state transportation board, Goode championed the construction of Charlotte’s I-485 Outer Belt Road.

He served on numerous other boards, including the UNC Charlotte Foundation and the Davidson College board of Trustees.

In 2013, the Jane and Rusty Goode Endowment for Educators was established at UNC Charlotte to support the College of Education’s efforts to develop innovative programs in partnership with schools.

Goode was honored for his contributions to building the state’s transportation system in 1997, when a new stretch of I-485 between I-77 and NC 49 was designated The Seddon “Rusty” Goode Jr. Freeway.

Discover much more about Rusty Goode and his legacy