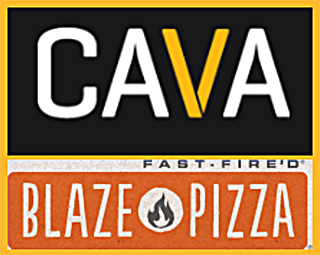 Blaze, a rapidly expanding West Coast pizza chain, has opened at The Pointe at University Place, while Cava, a Washington, DC-based restaurant chain specializing in Mediterranean dishes, just announced it will open one of its first two Charlotte restaurants here in February.

Blaze features wood-fired pizzas made in just 3 minutes, and offers beer and wine at the University Place restaurant. This is the second Blaze in Charlotte, after its debut in South End. Blaze is open 11 am-10 pm Sundays-Wednesdays, 11 am-11 pm Thursdays and 11 am-midnight Fridays and Saturdays at 8948 JM Keynes Drive.

Cava has leased about 2,700 square feet at 8936 JM Keynes Drive for a restaurant that can seat about 60 people, the Charlotte Business Journal reported earlier this week. Cava offers more than 50 items including a “signature” crazy feta dip, the Journal says. The company says that it sources its food from local farms, whenever possible.

About the Pointe at University Place

The Pointe is a new retail center within a few yards of the future JW Clay Boulevard transit station and parking deck. The Pointe is being developed by Casto to serve thousands of people expected to ride the LYNX Blue Line Extension between UNC Charlotte and Center City when the line opens next spring. The site is also directly across North Tryon Street from UNC Charlotte and a planned hotel and conference center.