City invites us to help shape I-85 “gateway” bridge 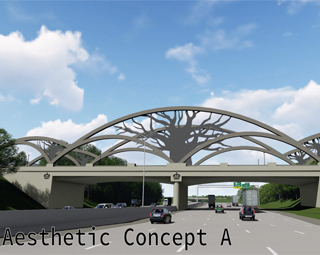 City planners unveiled a radically different type of bridge for I-85 last week – one that will have separate lanes for bikes, extra-wide sidewalk, and a signature design to tell motorists, “You have arrived in Charlotte and University City.” You can see the plans online, take a simulated “drive” and even help design a potentially iconic Queen City gateway.

The Oasis Shriners Center in University Place was a fitting location for the June 7 design presentation for the I-85 North Bridge, since it will span I-85 between Doug Mayes Place, next to the center, and Louis Rose Place in nearby University Research Park.

This bridge and the newly opened I-85 South Bridge near IKEA will make it much easier for thousands of workers at Innovation Park, Wells Fargo and dozens of other University Research Park businesses to get to the North Tryon Street business district and LYNX light-rail stations.

Watch the simulation and meeting presentation

Head to the project website to watch a 5-minute simulation of the future bridge and roadway.  Below that video simulation you will see a second link, titled “Virtual meeting & feedback form.”  Here you will get a 10-minute primer comprised of short videos that highlight the project’s key features:

The first thing you’ll notice about the new bridges is that neither has ramps connecting to I-85. Instead, the ramp-free overpasses will provide much safer paths across I-85 for cyclists and pedestrians, as well as planned shuttle buses running short routes between light-rail stations, retail centers, residential communities and Research Park businesses.

At the June 7 meeting, planners also unveiled a brand-new concept: a two-way “cycle track” that looks like a mini-roadway but is intended just for cyclists. This will run along one side of the bridge and nearby roadways, including part of JW Clay Boulevard between Doug Mayes Place and the JW Clay Boulevard Station and Parking Deck.

Other bridge and roadway features:

Planners hope you will both watch the virtual meeting presentation and spend time viewing and reacting to four design concepts for the future bridge. The design survey takes place at the end of the virtual-meeting video, so you must watch that first. Then you will see four designs and be asked several questions. There’s also a place for your own comments.

Take the survey by June 24

The virtual meeting and feedback form will be available through June 24 for your viewing and comments. Visit the project website to take part and to subscribe to project updates.