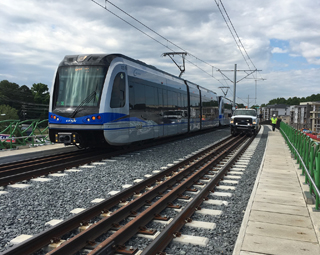 “Soooooo why aren’t the crossing gates coming down guys?” one astute viewer posted, as the video shows the train crossing the Orr Road intersection on North Tryon Street with bells ringing and a dozen workers in hard hats and yellow vests keeping vehicles from getting in the way.

A CATS spokesperson responded, “Right now we’re testing the wires you see above the train (the overhead catenary system) to test power, connections to the OCS wires, and track power. We’re still working on all the signals, so we have traffic control right now monitoring intersections as we go through. Remember to stay safe and be aware of your surroundings: Look, Listen and Live!”

The LYNX train crosses Orr Road with help from workers.

That prompted another person to ask why the Blue Line Extension won’t begin running until 2018.

The response from CATS: “We’re working every day to open by or before March 2018! We still have a lot of testing to do to make sure the entire system is safe and reliable, because safety is our top priority.

Tips for safety around LYNX line