Fox Sports and friends help kids get ready for Race2Educate 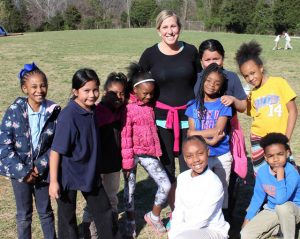 Elizabeth Fulk with some of her Nathaniel Alexander Elementary runners

Sixty students at Nathaniel Alexander Elementary School are getting lessons in speed and generosity, thanks to the good people at Fox Sports and their many friends. Those lessons and that generosity, in the form of paid entry fees and new tennis shoes for each child, will pay off on April 1, when students cross the finish line at the Race2Educate 5K and Fun Run.

Race2Educate is an annual event to benefit children attending the four Governors Village public schools and, for the first time this year, students in four other nearby schools. Last year’s event drew several hundred participants and raised over $17,000 for the schools and for scholarships.

Fox Sports stepped in this year, literally, thanks to Elizabeth Fulk. Fulk manages Fox Sports 1’s headquarters in University Research Park, and last fall she attended a meeting of University City Connect, an association of area businesses and groups including University City Partners that provides support to nearby public schools.

People at the meeting shared inspiring stories about how businesses were giving time and resources to improve our schools, Fulk said. Later, she met with the group’s leader, Rob Rogers of Chick-fil-A University Place, to brainstorm ways Fox Sports might help, too.

That brainstorming has grown into three separate efforts to help 60 students at Nathaniel Alexander Elementary School become more physically fit while training for the Race2Educate 5K and Fun Run. Fulk and three Fox Sports employees – Amber Freeze, Chris Maner and Shawn Burger – now visit the school weekly to train and run with the students and teacher Nicole Nederik. Nederik also is director of the Prodigal Son Foundation, a local nonprofit group that combines fitness and learning to inspire future leaders.

“They’re such a loving bunch of kids, and I really enjoy going over on Thursday afternoons and running laps and doing burpees, sit-ups and squats with them,” Fulk says.

With Rogers’s encouragement, Fulk next approached Fox Sports about paying the entry fee for the students to take part in the Race 2Educate event. “Like they say, sometimes all you have to do is ask,” Fulk says. FOXGives agreed to sponsor all 60 children.

Then came Fulk’s really big idea. She had heard about a Lake Norman-area woman who convinced people to donate hundreds of pairs of shoes for children in need. “I was inspired by what she did and I thought, well, I can too, through my friends, co-workers and family, and I got commitments for 60 new pairs of shoes.”

The children will get the new shoes next week, in time to break them in a little for the big race day on April 1. They’ll also get Fox T-shirts at their final Thursday practice. Think they’ll run a little faster come April 1 with all that support behind them? Come see and cheer them on, too!

Race2Educate 5K will take place at 8 am April 1 at Nathaniel Alexander Elementary School, 7910 Neal Road in University Research Park. The Fun Run will start at 9 am, followed by a post-race party.