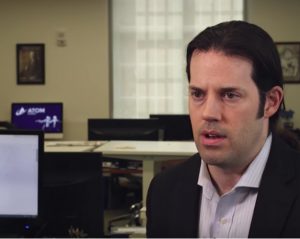 The company, founded by UNC Charlotte engineering graduate Ryan Kennedy, has created a digital switch that works up to 2,000 times faster than current mechanical circuit breakers. The new digital switches can also be customized for a wide range of loads and performance levels.

Atom Power is based in the Charlotte Research Institute’s PORTAL Building near North Tryon Street. The company’s digital switch was the 2016 winner of the Innovative Product at the NC Tech Awards, North Carolina’s only statewide technology awards program.

Funding from Siemens will allow Atom Power to take its digital circuit breaker through approval from Underwriters Laboratories, this spring, through start of commercial production, expected this summer.

“Throughout our over 170-year history, Siemens has been on the forefront of energy innovation and we continue to leverage partnerships and collaboration to move industries forward,” said Terry Royer, Vice President of Operations and Product Development, Siemens Low Voltage and Products business. “Atom Power is on the leading edge of a fundamental change in the traditional circuit breaker and shows great promise toward enhanced energy awareness and faster reaction times in an increasingly complex energy landscape. We’re excited to expand our investment in U.S. innovation and be a part of the transition to solid-state protection.”

Siemens AG is a global leader in electrification, automation and digitalization. it is No. 1 in offshore wind turbine construction, a leading supplier of gas and steam turbines for power generation, a major provider of power transmission solutions and a pioneer in infrastructure solutions as well as automation, drive and software solutions for industry.

In Charlotte, Siemens operates its Charlotte Energy Hub. With its current workforce of 1,500 and approximately 1.2 million square feet of space under roof, Siemens is the largest manufacturer in the city and the second largest in terms of employment among the 250+ energy companies based in Charlotte.

The company’s nuclear instrumentation and control group operates at a separate facility in Innovation Park at University Research Park. At UNC Charlotte, Siemens provided $2 million to create the Siemens Large Manufacturing Lab in the EPIC facility in the Charlotte Research Institute campus. The building is home to the William States Lee College of Engineering.