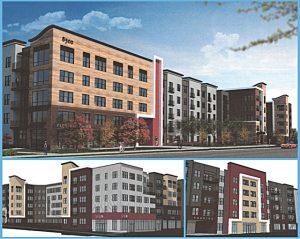 ATAPCO, owner of University Executive Park, sought the rezoning to replace two of its one-story 1980s office buildings fronting North Tryon Street. The new building can have up to 280 apartments in a five-story structure with internal structured parking, as well as at least 5,000 square feet of shops and other non-residential uses on the street level. The building footprint fills most of the 4.5-acre site.

Both the Charlotte City Council and the Zoning Committee of the Charlotte-Mecklenburg Planning Commission gave unanimous approval to the rezoning request, after the developer revised the design to make the building visually more open to visitors and less block-like.

Design elements required by the final approved plan include:

The LYNX light-rail line extension is nearing completion between the existing terminus at 7th Street in uptown Charlotte and the new final station near Cameron Boulevard on the UNC Charlotte campus. Service is projected to begin in late summer 2017. ATAPCO has already spent $4 million to upgrade University Executive Park office buildings and grounds near the future station as it seeks to attract businesses wanting access to the frequent and reliable train service.

In approving ATAPCO’s rezoning request for apartments and retail, the Zoning Committee zeroed in on this new building’s importance in establishing a more urban, walkable tone in future development near each LYNX Blue Line station. The University City Area Plan update provides a blueprint for a transit-oriented urban corridor, particularly around North Tryon Street and Harris Boulevard. 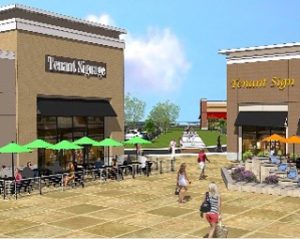 The Pointe at University Place

Several residential, retail and mixed-use developments have been proposed or are under construction near stations on the 9.1-mile addition, including: 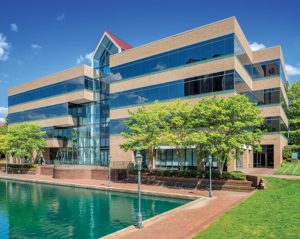 And Origin Investment, which bought the four-story One University Place office building in 2015, recently completed a multi-million dollar refurbishing of common areas and construction of a new suite of offices on the fourth floor.