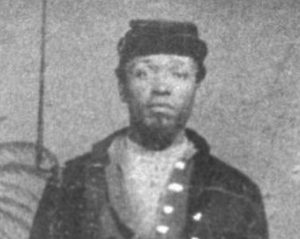 University City Regional Library will help bring its history books to life on Feb. 4, when it hosts Maurice Johnson, active member of the 102nd U.S. Colored Troops reenactment group. Williams travels the U.S. portraying and discussing African American soldiers through the centuries, including the American Revolution and the Civil War.

The 102nd organized in Detroit in 1863. The following year, the 102nd was among 5,500 Michigan soldiers who traveled South Carolina to battle Confederate forces. The 102nd fought in several skirmishes and battles across South Carolina and Florida. Unlike much of African American contributions, the soldiers of the 102nd are known and remembered, thanks to a National Park Service searchable database of the hundreds of soldiers who served in the 102nd.

On Feb. 4, Mr. Johnson, dressed in full reenactment uniform, will present U.S. Colored Troops Living History. Johnson will share how African American soldiers entered into the armed forces in both the Revolutionary and Civil wars, how they lived, what conditions they faced, and how their role was vital in both wars.

The free program, from noon to 4 pm, is intended for adults and youth ages 12 and up. The presentation is part of the library’s celebration of African American History Month.

The library is at 301 E W.T. Harris Blvd. Visit the library website to learn about dozens of programs for adults, children and all ages in the next month. Topics range from Preschool Storytime to Microsoft Publisher 2013 I&II basics and intermediate skills.