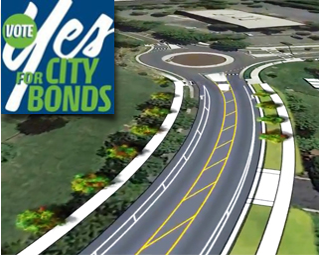 Three improvements could even change how we use bicycles: extra-wide sidewalks for both walkers and recreational cyclists, and two other kinds of bike lanes separated from car traffic.

The four related street improvement projects in University City are among 12 that the city has planned around the future LYNX Blue Line Extension between uptown and UNC Charlotte.
Collectively called the Northeast Corridor Infrastructure Program, or NECI, these projects are intended to aid local access to LYNX stations, whether by bus, car, bike or foot.

In University City, those projects will improve portions of Tom Hunter Road and Rocky River Road West near North Tryon Street, and all of McCullough Drive and JW Clay Boulevard.

While all projects will get sidewalks and bike lanes, three streets in University City will have special features to encourage cycling even by families and children.

On McCullough Drive between Harris Boulevard and North Tryon Street, the city plans to widen the two-lane roadway to allow a 5-foot-wide buffered bike lane that is separated from the vehicle lane by a 3-foot-wide painted strip.

Clay Boulevard has no bike lanes and incomplete sidewalks.

On the north side of Clay Boulevard between the Clay Station Parking Deck and Doug Mayes Place, the city will add two features to help cyclists:

Rocky River Road West will also have the 10-foot-wide sidewalk on the north side of the road for causal cyclists and pedestrians, along standard curbside bike lanes.

“These are all going to be ice-breaking,” said Jim Keenan, program manager for the city’s Engineering and Property Management department. “We do have some buffered bike lane on Remount Road, but these (on Clay Boulevard and McCullough Drive) will be pushing the edge for the kind of bike facilities we are installing.”

The city initially had planned traditional bike lanes along Clay and McCullough, Keenan said. The new design grew out of a meeting with University City Partners, UNC Charlotte and cycling advocates, who pushed for more features to encourage cycling, especially near the campus and greenways.

Total cost of the dozen projects over a decade is estimated at $106 million, with money coming from four bond packages between 2014 and 2020. Bonds passed by voters in 2014 provided $16.6 million, used mainly for planning and design.

Construction on several projects can start by 2018 if voters approve this fall’s bond package, which includes $35.3 million for NECI work.