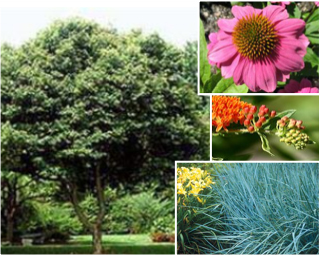 What may be Charlotte’s longest planting bed and street-tree project will soon start emerging along nearly 4 miles of North Tryon Street as part of the LYNX light-rail line.

In December, contractors will begin planting 700 trees with names like Red Splendor and Flame Amur between the sidewalk and curb. Next fall will come 170,000 shrubs, ornamental grasses, spring bulbs, perennials and other ground cover.

Urban thoroughfare in the making

The Blue Line Extension under construction between uptown and the UNC Charlotte campus includes nearly 4 miles of track and stations operating in the North Tryon Street median beginning at Old Concord Road, plus parking decks at the University City Boulevard and JW Clay Boulevard stations.

While building the transit line, Charlotte is transforming North Tryon Street into an urban highway. The state has lowered the speed limit to 35 mph throughout the transit-line stretch. Bike lanes and sidewalks will run the full 4-mile length, shaded by small- to medium-height trees where possible. The medians will have gardens between highway and tracks.

Vincent, a landscape architect and the landscape manager for the Blue Line Extension, began working on the project part-time in 2009 – four years before the official groundbreaking for light-rail construction. This became her full-time job two years ago, and it has been a big one both in terms of design and project management.

For starters, the trees, ground cover, grasses and bulbs all must do well in extremely harsh growing conditions including intense summer heat magnified by traffic and asphalt, and no irrigation, except watering of the trees during their first year after planting.

Second, the plants must meet very specific characteristics. You can’t plant tall-maturing trees under power lines or beside buildings such as the two transit-station parking decks. You don’t want median ground cover that needs mowing. But you do want median ground cover that looks good while discouraging people from trying to walk across the median and transit tracks between intersections.

Even the dirt has to be right. Work crews have begun laying down a special blend of clay, sand, silts and organic material in the future median beds. Vincent is taking core samples along the highway shoulders to make sure the dirt there will work for the future trees. If it doesn’t, the soil will be improved before planting starts in December.

And then there is the timing. “It’s all about sequencing,” Vincent explained. Trees do best if transplanted in winter months. Plus, most of the construction along the roadsides is now finished, Vincent said, so trees will go in this winter.

Meanwhile, construction crews will spend the next several months completing the tracks and stations and installing the utilities. So, the city will wait until next fall to plant the medians.

With so many plants involved, Vincent has had to line up several growers to produce the junipers, ornamental grasses and perennials/groundcover.

And finally, after all of those requirements are met, you really do want these many thousands of trees, shrubs, grasses and bulbs to look good together – even across an extra-wide highway with transit trains and thousands of vehicles passing by.

And the final winners …