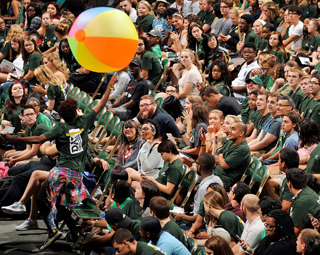 Our university roars to life this week for the fall semester, with dozens of “Week Of Welcome” events from a chocolate binge to the 49,000 Water Balloons Fight, and plenty of good news. Enrollment tops 28,700. Belk College launches a new doctoral program. The showcase Sandra and Leon Levine Hall nears completion. And so much more!

UNC Charlotte welcomes a record 28,700 undergraduate and graduate students this fall. That’s up about 700 from last year and up nearly 12,000 since 1999! Plans call for 32,000 students or more. Prepare to move over, ECU, NC State and Chapel Hill!

You can’t miss the 425-bed Levine Hall rising at the main traffic circle near the University City Boulevard entrance. Levine Hall will house students of the Levine Scholars Program and Honors College, offices for those programs, student work-study areas and places for seminars. Completion is tentatively set for late this fall on the $45 million facility.

Several buildings are undergoing renovations, including:

More buildings for our growing university

As UNC Charlotte’s star rises amid major universities, so does its academic offerings. The latest: the first doctorate in business administration offered in the Carolinas, coming on line in fall 2017.

“There are currently very few options for business executive education beyond the master’s degree level in today’s business world,” says Jennifer Troyer, associate dean for graduate programs in the Belk College of Business. “The explosion of data, complex technology, and the increasing complexities of operating in a rapidly changing global environment requires abilities that exceed the MBA or executive MBA level.”

The Belk College of Business developed the DBA in partnership with the business community to address this unmet need in the Carolinas and create a premier business-applicable degree taught in an executive format.

The most significant project completed so far is the vastly improved realignment of Phillips Road via a new bridge over Toby Creek and Toby Creek Greenway. People driving stick shifts were typically scarred for life after hitting a red light at the top of the steep hill where Phillips used to end at Cameron Boulevard.

The new alignment carries Phillips Road to a level, signalized intersection on Cameron Boulevard where Phillips flows into Craver Road. The new route also vastly improves safety for users of Toby Creek Greenway, which now passes under busy Phillips Road, rather than across it.

Workers are finishing final improvements to Cameron Boulevard. Once everything is finished, this NC Transportation Department project will allow both right and left turns from Cameron onto NC 49 for the first time in several years.

Students living in the vastly expanded South Village dorm area will also benefit, since the signal will provide a safe way to walk and bike to nearby Town Center Plaza, a popular destination for dining, grocery shopping and working out at the fitness center.

Having the line’s final station beside Cameron Boulevard means students, faculty and staff will have dependable transportation to and from campus running every 10-15 minutes for 20 hours every weekday, and every 20-30 minutes on weekends.

The university has created a web page to help students, staff and faculty get ready: www.lightrail.uncc.edu. The website offers many details about the future transit service, plus links to Charlotte Area Transit System social-media sites that provide frequent construction updates.

One important light-rail detail still to be nailed down: university discounts. “UNC Charlotte and CATS are working to create exclusive pass options for UNC Charlotte students, faculty and staff.  Details regarding these options should be finalized by fall of 2016,” the campus website says.