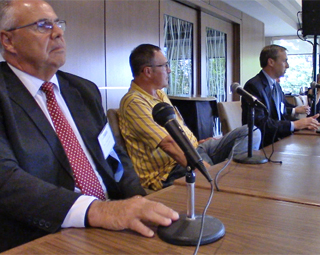 “I always get asked, ‘Where is the city?'” Holmes told the gathering at the Charlotte Hilton University Place, a short walk from the Clay Boulevard light-rail station. “Well, the city will be right here where we are sitting.”

Nace, Soporowski and Holmes were invited by the Chamber chapter to take part in a brief forum on retail developments in University City. More than 60 people came to the Hilton on Aug. 11 to hear them.

Here are the key points of their comments

Question: What influence will the coming LYNX light-rail line have on IKEA’s business?

“What we are looking at going forward, when the light-rail line is completed, is getting people out of south Charlotte and uptown and to get them up here. We hope light rail will help, especially with the young professionals,” Nace said.

Most people who visit IKEA Charlotte expect to browse the store, find things to buy, pick them up in the warehouse area and load their goods into a truck or van to take home, Nace said. However, you don’t need a truck to shop at IKEA, he said.

“Our busiest store in the country is our Brooklyn store, which I come from before, and everybody comes by subway, by cab, by Uber, and they use the delivery services.” The Charlotte store has the same delivery services available to shoppers, he said.

Question: What is IKEA’s impact on the broader University City economy?

IKEA Charlotte employs more than 300 people, Nace said. Plus, “We are a destination store. We get a couple million visitors a year, and the majority come from outside the 60-minute drive time … so we are bringing a lot of fresh money into the area. That benefits restaurants and hotels.”

Question: What improvements have happened recently at IKEA Charlotte or are coming soon?

IKEA Charlotte recently remodeled its restaurant area to create what amounts to three restaurants in one – a quick-serve area for shoppers in a hurry; a more traditional dining area for people seeking a sit-down meal; and a coffeehouse type area for shoppers wanting to take a break and relax.

“We also try to change (the store displays) throughout the year,” Nace said. “We have people who come 3-4 times a year, and we want them to have a different experience every time they come, so we are constantly changing our room settings.”

One big change at IKEA will never be seen by shoppers: All U.S. IKEA stores have installed solar farms on their roofs. The 2.4-acre farm at IKEA Charlotte generates a third or more of the electricity needed to operate the store, Nace said.

Question: What influence will the coming LYNX light-rail line have on Concord Mills’s business?

“Right now, we feel no impact with light rail, but we certainly will see an impact (if transit is eventually extended to Cabarrus County),” Soporowski said. “One of the things we lack is public transport to move people from this area and Charlotte … If we can move people though the Blue Line to us, I think that will be a big plus for us.”

Question: What is the mall’s impact on the broader University City economy?

“I was there in 1998 when the center was being built and, if you remember, it was just four corners of dirt,” Soporowski said. “Look at it today: The Mills as a product is a driver, and what we actually do is spur development.

“You see that development on Bruton Smith Boulevard as well as Concord Mills Boulevard. Not only do you have retail but you have the restaurants. We have over 2,000 hotel rooms. And there are all types of interest from other people to locate in that area.

“The mall has a far reach in the state,” Soporowski added. “A lot of the customers we get come from the Greensboro-High Point area, so we are bringing more people into the market area.”

Question: What changes have happened recently at Concord Mills or are coming soon?

“One issue we face is traffic congestion,” Soporowski said. “Hopefully that will be resolved in 2019. The state has approved a $7.9 million flyover to ease congestion.” (The project will provide a new bridge on Concord Mills Boulevard to carry two lanes of traffic entering the mall without needing a traffic signal.)

The mall is constantly revising the tenant mix, Soporowski said. Outback Steakhouse, Bonefish Grill and Chipotle Mexican Grill are building on the mall property, and the mall is converting the former Saks Fifth Avenue Off 5th space into a 23,000-square-foot H&M clothing store. The mall has also started a multiphase renovation, focusing on the interior this year and the exterior in 2017.

Question: What influence will the coming LYNX light-rail line have on University Place and other North Tryon Street businesses?

“So when you talk about the impact of light rail, it is a very focused concentration of capital that is going to pour into University City’s station areas” at JW Clay Boulevard, McCullough Drive and North Tryon Street near University City Boulevard.

Question: What is the impact of University Place and the light-rail transit stations on the broader University City economy?

“What people really desire are local and authentic businesses,” Holmes said, “and those tend to happen best around station areas, with the foot traffic they generate. So, this place will end up being exactly as planned (in the early 1980s) – however, 30 years later – as an incredibly walkable and complete neighborhood with housing, with some office and a lot of smaller retailers – which is a huge change from where University Place has been the last 30 years, with a lot of big-box retailers.”

Question: What changes have happened recently or are coming soon?

“University Place is set to change, and it’s one of the reasons I am with University City Partners right now,” Holmes said. “We have a university with 28,000 students and the 4,000 administrators who support them and second largest employment base in the city, which is over at University Research Park. In the middle of that is this location right here.”

As the light-rail service starts to trigger more intense development, many surface-area parking lots will be converted to other uses such as apartments and condos, with parking, where needed, in multi-story parking decks, Holmes said. That change will allow the emergence over time of a walkable “downtown” area and housing clustered in and near University Place – apartments at first but for-sale housing to follow, “and housing drives that local retail that people tend to desire down the street from their house.”

Followup questions from the audience

Explain what is going on, retail-wise, at the JW Clay Boulevard parking deck and the adjacent land in University Place where two old buildings were just demolished.

The parking deck shops and the new retail buildings at University Place are “reflective of what the future is in the state of modern retail, in terms of main streets. It is very entertainment driven,” Holmes said. “That is the direction we are going in and where the market velocity is pointing us.”

Eight businesses have signed leases so far at The Pointe, mainly restaurants that will serve students and shoppers, he said. “That development will be the first thing you see when you get off the train” at the JW Clay Boulevard light-rail station, “so it will be sort of the food court for University Place.”

Question: Why are there so many vacant storefronts?

An audience member said that she has noticed that University Place and other retail centers nearby have many vacancies. What is being done to fill them, short-term, she asked?

Part of what you are seeing is strategic, Holmes said. Having vacant spaces allows the owner to make changes sooner, since there are no tenants with leases who might not want to move if the owner decides to redevelop the space (as just happened with the University Place buildings that previously housed Old Navy and Talbot’s).

Holmes explained that University City Partners and several major property owners including Casto, the owner of the Shoppes at University Place, recently hired Design Workshop, a leading planner of university-related commercial areas, to create a master plan for developing land within a half mile of the JW Clay Boulevard Transit Station.

“They (Design Workshop) have done a tremendous amount of private development work (around university campuses) that has come to fruition exactly as planned,” Holmes said. “What we don’t want is to do a lot planning work and have the plan sit on a shelf. We have been focused from day one on getting a plan in place that the community wants, that the residents want, that visitors want and the market especially wants, and it can happen pretty quickly.”