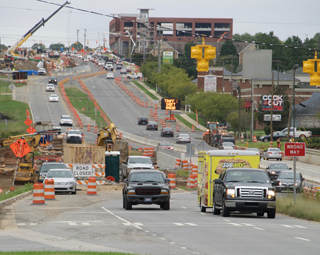 Northbound traffic has used the southbound North Tryon Street bridge for the past year.

Replacement of North Tryon Street’s bridges over Mallard Creek will reach an important milestone in mid-October, when traffic begins flowing across both new spans. The Mallard Creek Greenway will reopen beneath the spans at the same time, said NC Transportation Department spokesman Warren Cooksey.

The state began replacing the old, narrow bridges in spring 2014. In February of this year, the company working on this and three other state projects walked off the job in a contract dispute. A new contractor resumed the project a few weeks later.

Traffic in both directions currently crosses Mallard Creek on the new southbound span, which opened in 2015. The Mallard Creek Greenway has a detour path that allows users to cross North Tryon Street at a signalized pedestrian and bicycle crossing.

Once the northbound bridge opens this fall, traffic will flow on both new bridges. The new bridges will have three lanes in both directions, plus sidewalks and bike lanes paid for by the city of Charlotte. The greenway will be returned to its previous path beside the creek as it flows under the bridges.

Cooksey said that the project is roughly on schedule, after factoring in the several weeks before a new contractor was hired. While the roadway should open to traffic in October, some additional work will continue for a few more months, including landscaping and reforestation.