Take a visual helicopter tour of our LYNX line to Uptown

The city of Charlotte recently sent a photographer aloft to capture the progress along the 9.3-mile LYNX Blue Line Extension, under construction from uptown Charlotte to University City.

We culled through nearly 200 photos to provide this graphic overview of our future light-rail line to Uptown, scheduled to open in August 2017.

CLICK ON ANY PHOTO TO SEE IT IN LARGE FORMAT 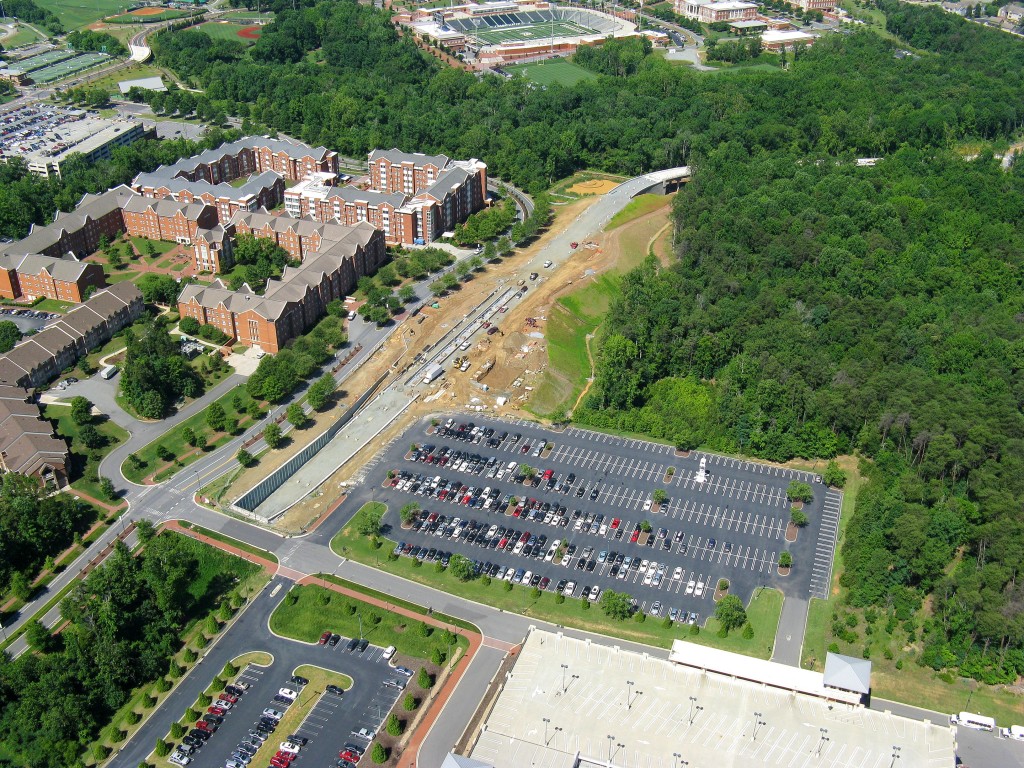 1. Our aerial ride over the future LYNX Blue Line Extension starts in the heart of the UNC Charlotte campus, beside Cameron Boulevard. Several dorms are to the right. Richardson Stadium is in the background. You can see a small segment of the long bridge that will carry the tracks over Toby Creek and a nature preserve.

2. This stunningly clear vista captures much of the 4-mile stretch of the LYNX line between UNC Charlotte and Old Concord Road. In the foreground is the beginning of the ramp that will carry the tracks up from a tunnel that begins on campus and runs under the northbound lanes of North Tryon Street and into the median.

3. JW Clay Boulevard Station and parking deck are nearing completion. Note the pedestrian bridge between the deck and station in the middle of North Tryon Street. Work started recently to extend that bridge to the other side of North Tryon Street. UNC Charlotte is in the bottom right part of the photo; Carolinas HealthCare System University’s property starts in the bottom left corner. Both are helping pay for the bridge extension.

4. The LYNX line will ride this long span over Harris Boulevard. University Place and its signature lake are envisioned as ground zero for a future walkable urban community of offices, shops and housing. Carolinas HealthCare System University, at the bottom right corner, expects to see a surge in patients once the transit line begins operation. In the background is University Research Park.

5. North Tryon Street sweeps past the University City Boulevard Station and parking deck. A short segment of University City Boulevard crosses the bottom right corner. The cleared area in the center of the photo is a new apartment community under construction. That is expected to be the first phase of a large development that includes offices, shops and restaurants. Another developer plans to create a similar community on 62 acres directly across North Tryon from the station.

6. The dirt path slicing through the center of the photo is the future LYNX train bed after it leaves the North Tryon Street median via a bridge at Old Concord Road. The Old Concord Road Station and parking lot are in the middle of the photo. To the left are the old North Park Mall and a newer retail center. Planners expect the LYNX station to breath new energy into this 50-year-old retail hub.

7. The LYNX line will have several popular stops between campus and uptown, including NoDa at 36th Street. The new station will go about where the track starts to bend toward downtown. 36th Street is being rebuilt to go under the tracks at that point. One other landmark you may be able to spot is a blue-gray smaller building just to the left of the Bank of America headquarters. That is UNC Charlotte’s Center City building.

8. Here’s a bird’s eye view of NoDa. That large cleared area near the tracks is the future Crescent NoDa apartments – 344 apartments plus ground-level retail. A multi-story retail and office building is planned next door.

9. Once the tracks cross under the Matheson Avenue bridge (foreground), the LYNX line will run for more than a mile through old industrial buildings and switchyards.

10. The Blue Line Extension enters Uptown Charlotte after passing under the Brookshire Freeway. The UNC Charlotte Center City building, designed to resemble a stack of books, sits near the future Ninth Street Station. The university expects many students to ride the LYNX to Uptown Charlotte.

11. Two blocks past the UNC Charlotte Center City building, our new Blue Line Extension meets the existing light-rail line’s terminus at the Seventh Street Station (the building with the blue panels on its side).

12. Uptown’s towers and entertainment venues will be the destination for many BLE riders. But it will only be the midway point for the full Blue Line. You can travel another 9.6 miles nearly to Pineville – on the horizon in top left area.