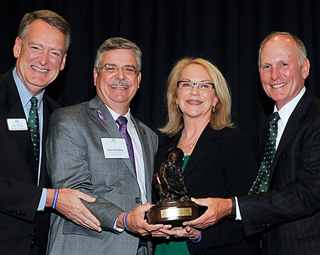 University City Partners board member Ron Kimble has always juggled many assignments. He’s about to get much busier even as he receives well-deserved accolades for past accomplishments.

On June 3, UNC Charlotte presented Kimble with its 2016 Distinguished Service Award for promoting the university.

Kimble will oversee city operations while the City Council seeks a permanent replacement. Kimble has served as Charlotte’s deputy city manager since 2007 and previously served as city manager in Greenville, NC.

“I am honored to serve in the interim role,” Kimble said.  “I am strongly committed to this city that I love and call home.  I want the transition to the next city manager to be as smooth as possible.”

Just three days earlier, Kimble was honored by UNC Charlotte for his many contributions both to the university and the Charlotte region. In honoring Kimble, UNC Charlotte Chancellor Philip L. Dubois said he personifies the purpose of the Distinguished Service Award, which honors individuals who are devoted community servants and selfless in their dedication to the betterment of Charlotte and the greater region.

“We have worked closely together on some major projects based on the idea that we can do more together than we can do separately,” Dubois said. “The sum is definitely greater than the parts. And when you talk with other people in the city who have worked with Ron, they all said the same thing. Ron gets things done. He’s the rainmaker, and we love it when he forces us to take out our umbrellas.”

As deputy city manager, Kimble led several major initiatives including the NASCAR Hall of Fame, cultural arts facilities expansion and the U.S. National Whitewater Center. He has been the lead staff member for several city council committees, including economic development and planning and government affairs. He also serves as an ex officio member of the University City Partners board.

Kimble has been the lead partner with UNC Charlotte and the city on landmark projects and issues including UNC Charlotte Center City, the Blue Line Extension of light rail and other economic development partnerships. He has promoted the value of UNC Charlotte throughout the city and has been one of the University’s strongest allies.

“Ron is a gifted civic leader and economic development icon who brings people together to make impossible things happen,” said Cathy Bessant, Bank of America chief operations and technology officer and a UNC Charlotte trustee. “Without doubt, Charlotte and UNC Charlotte wouldn’t be what we know today without Ron Kimble.”

Kimble and his wife, Jan, have also provided important civic leadership through the Jamie Kimble Foundation for Courage. They established the foundation in memory of their daughter, Jamie, who was murdered as a result of domestic violence.

“We know that in the realm of domestic violence protection this is just the beginning for Ron and Jan,” said Karen Parker, president and chief executive at Safe Alliance, a nonprofit organization serving more than 20,000 people annually with sexual assault, domestic violence, child abuse and trauma services in Mecklenburg, Union, Cabarrus and south Iredell counties.

“Often when there is domestic violence, people don’t want to talk about it,” she said. “But Ron and Jan are really different. They have taken on this life mission of helping others and ending domestic violence.”