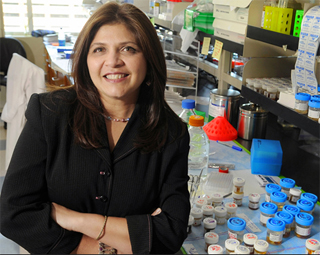 A UNC Charlotte researcher and a University Research Park-based business have been honored for their contributions to our community. The Charlotte International Council recently honored Pinku Mukherjee for her innovative work on breast-cancer detection and treatment, and Rack Room Shoes for its many philanthropic efforts.

As the Irwin Belk Endowed Professor of Cancer Research at UNC Charlotte, Mukherjee is transforming the ways in which cancer is diagnosed and treated. She has designed innovative approaches to more accurately detect breast cancer early and is developing targeted therapy and imaging for pancreatic, ovarian and colon cancers.

She also has shared her discoveries with her students and embodies the spirit of an internationally minded entrepreneur, the cabinet noted in presenting the honor.

This is the latest accolade for Mukherjee, who was honored a year ago with the O. Max Gardner Award – the highest faculty accolade given by the UNC Board of Governors. The award, established by a provision in the will of Gardner, recognizes UNC system faculty members who have “made the greatest contribution to the welfare of the human race.”

Also receiving awards on May 4 were

Rack Room Shoes also was honored by the Charlotte International Cabinet at the May 4 banquet. The company received the Mayor’s International Community Award. The company, whose headquarters are in University Research Park, has celebrated a culture of giving back for decades.

Operating under the German ownership of The Deichmann Group, one of the largest privately owned footwear retailers in the world, the company commits to year-round charitable initiatives that span local, national and even global proportions.

Rack Room Shoes has raised millions of dollars – and donated hundreds of thousands of shoes – to benefit children in need through an annual campaign with the non-profit, Shoes That Fit. Funds raised at individual stores stay in the local communities.

Charlotte and Concord have repeatedly been named as top fundraising cities. The 2016 campaign launches this July. Through a gift matching program, Rack Room Shoes recognizes, encourages and amplifies the generosity of its associates by empowering them to better the communities in which they live and work. Through this system of charitable matching, Rack Room Shoes commits to doubling the impact of associate charitable donations to support causes that are meaningful to the people who represent the company. Rack Room Shoes also offers the opportunity for individuals and organizations to make requests for a $100 Rack Room Shoes Gives donation card to support local non-profit organization fundraising events.

Others recognized for their contributions

Other award winners were Mike Hawley, who received the Richard Vinroot International Achievement Award for his role as director and past chairman of the World Affairs Council and in promoting economic development within the international community in Charlotte.

Maha Gingrich received the Global Leader Award as an exemplary role model as a successful entrepreneur and for working to bring international educational, cultural and business opportunities to the region through various programs, including Dances of India.