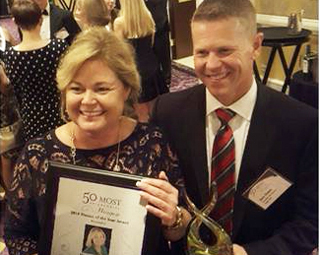 Darlene Heater and her husband, Jerry

And the Charlotte region’s Woman of the Year is … Yes, University City Partners Executive Director Darlene Heater! Heater received the honor on May 20 at The Mecklenburg Times’s 50 Most Influential Women awards banquet in uptown Charlotte.

“Huge Congratulations Darlene!!! You have done a lot for our Charlotte and University City!  Well deserved,” emailed Tracy Dodson of Lincoln Harris, who helped nominate Heater.

“It is a tremendous honor and privilege for me to serve our community, personally and professionally,” Heater said of the award. “To be tapped as the 2016 Woman of the Year honors my work as a female economic development executive as well as a civic leader in our community. I am grateful.”

The Mecklenburg Times annually hosts the 50 Most Influential Women awards “to recognize the important role women play in the greater Charlotte region, in the economy, and in society.” A panel of business leaders chose the honorees based on professional accomplishment and community involvement in the Charlotte region.

News of Heater’s award pleased many of the people who have worked closely with her.

“Job well done, Darlene! Congratulations and thank you for all of your hard work!” added Denise Steindl, property manager for University Executive Park.

“I could not think of a more deserving woman in this entire city. Congratulations Darlene,” wrote Moses Fox III, who oversees community partnerships for the Northeast and South Learning Communities of Charlotte-Mecklenburg Schools.

Dodson, now vice president of brokerage and development at Lincoln Harris, worked closely with Heater when they both worked at Charlotte Center City Partners. “Darlene’s commitment to University City is only a part of her leadership story,” Dodson wrote about Heater in nominating her as one of the region’s 50 Most Influential Women. “She is without a doubt a leader in shaping the success of our future Charlotte.”

On Monday, Dodson praised Heater’s ability to work with multiple groups on complex projects and find ways to balance often competing interests to achieve “the best win-win for everybody.”

“I’ve known her almost 10 years, and in that time I have seen her take on a lot of great roles and tasks and really, truly deliver in ways that benefit either the organization she is working with or our city as a whole,” Dodson said.

Involvement in many programs

In its article announcing Heater’s selection as Woman of the Year, the Mecklenburg Times praised Heater’s extensive involvement in numerous programs. “It would be difficult to take a good look at Charlotte and its institutions without seeing her handiwork.”

The news article chronicled a long string of Heater’s contributions, including service on numerous city, regional and state organizations ranging from the Urban Land Institute and U.S. Green Building Council to the Charlotte Regional Commercial Board of Realtors.

That focus on walkable urban communities has continued at University City Partners since Heater was named its Executive Director in late 2013, the Times wrote. One of her first major accomplishments was to help city planners finish a lengthy update of the University City Transit Station Area Plan – the public and private blueprint for transforming three LYNX Blue Line Extension stations on North Tryon Street into walkable urban communities.

As director of University City Partners, Heater oversees numerous activities to promote and nurture a municipal service district larger the Charlotte’s uptown and encompassing UNC Charlotte, sprawling University Research Park and much of the business and retail development in between. Working closely with Heater are UCP’s strong and involved board of directors and a staff of two full-time employees.

With Heater at the helm, UCP has become an information hub for commercial sales and leasing while providing much-needed community newsletters and social media, creating visionary plans such as a parks and open-space plan for the central business district and assuming day-to-day operation of the 2,000-plus acre University Research Park. UCP offers two internships each semester to UNC Charlotte students, as well. Both of Heater’s children have attended the university.

Supporting a strong residential community, too

A resident of University City for nearly 20 years, Heater recently began guiding UCP efforts to nurture the 160,000-resident suburban community, as well – most notably by partnering with businesses to strengthen the four public schools that comprise the Governors Village within University Research Park.

Charlotte Deputy City Manager Ron Kimble, an ex officio member of the UCP Board, praised Heater’s leadership here in numerous efforts to support walkable streets, stronger neighborhoods and transit-oriented development, while nurturing a vibrant and sustainable UCP board structure. “She expects accountability and intelligent, hard work from others, and she gives her all in return,” Kimble said.

Heater’s newest initiative follows that same path. She is spearheading a partnership among UCP, UNC Charlotte, Carolinas HealthCare System University and and four retail property owners in and near University Place and the Clay Boulevard Transit Station.

Their lofty goal: to craft a common vision for shaping a new urban downtown focused on venerable University Place – a transit-powered rebirth of the transformative mid-1980s mixed-use development that helped spark University City following the arrival of IBM in 1979.