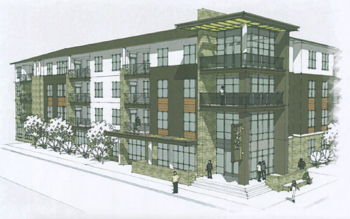 Construction has started on the 375-unit University City Apartments at Tom Hunter Station. The 15.4-acre site is between Orchard Trace Lane and the former Mineral Springs Road, just southwest of the I-85 entrance road.

Meanwhile, McKinney Holdings NC II LLC has requested a rezoning of 15 acres just north of the University City Boulevard Station from B-2CD to TOD-M. A general plan for that property shows multifamily housing and offices. The rezoning hearing date has not been set; the earliest possible date is June 20.

The city zoning ordinance regarding TOD-M states: This transit oriented mixed-use district is established to support a blend of high density residential, high intensity employment/office, civic entertainment, and institutional uses, as well as a limited amount of retail uses in a pedestrian friendly area.”

The masterplan for University City Gateway suggests retail uses along North Tryon between the I-85 entrance road and the CATS parking deck, residential development of 4-6 stories between the deck and the existing InTown Suites hotel, and an office campus with lake features and open space to the rear of the property.

The approved site plan for Carolina States’ mixed-use development calls for all principal buildings to have multiple stories and non-residential uses on the first floor. Several other standards in the approved site plan seek to create a community of buildings with multiple uses, particularly close to North Tryon Street, parking situated away from streets, and buildings located close to the streets.