Honor Swim for the Children of Fallen Officers – YOU can help 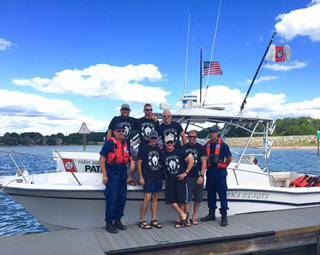 Few of us worry about co-workers dying on the job. CMPD Officer Jason Peetz of the University City Division has lost two co-workers. Now Peetz and five fellow officers seek to help their kids, by swimming Lake Norman.

You can help, too.

For the rest of the story, and to make a donation, read on:

Honor Swim for the Children of Fallen Officers

On May 18-19, six Charlotte-Mecklenburg police officers will swim the 34-mile length of Lake Norman to raise college funding for the children of two of CMPD’s fallen brothers, Officer Sean Clark and Officer Fred Thornton.
CMPD Officer Sean Clark was killed in the line of duty on April 1, 2007, leaving behind his son and wife, who was seven months pregnant with their second son.

CMPD SWAT Officer Fred Thornton was killed in the line of duty on Feb. 25, 2011, leaving behind his wife, two daughters and two sons.

Both men served Charlotte with pride and distinction, and both left behind families. The goal of the Honor Swim is to establish college funds for three of their children.

The swim will take place at Blythe Landing, located at 15901 NC Highway 73, Huntersville, NC 28078. The swimmers will boat out from Blythe landing to their swim start point, which is the most northern part of Lake Norman at the I-40 bridge. Once at this point, the swimmers will swim throughout the day and night until they reach the finish line back at Blythe Landing. The swim is anticipated to be finished 24 hours later, on May 19th, at approximately 3 p.m.

A large, family-friendly festival will be held at the finish line on May 19 to celebrate the completion of the swim. The festival is open to the public and will have food trucks, vendors, activities for children and a pet adoption sponsored by Animal Care & Control. A raffle will also be held once the swim is completed.

Learn more and help the children of our fallen officers