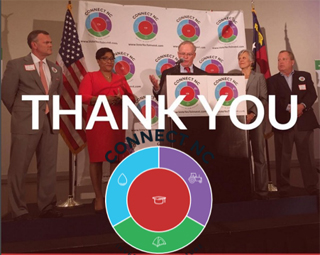 UNC Charlotte and all other schools in the UNC system won big in the March 15 primaries, as NC voters approved $2 billion in bonds for infrastructure improvements statewide. The bonds include $90 million for a science building at UNC Charlotte, the state’s fastest growing university.

The $2 billion in bonds includes $980 million for constructing new academic facilities and other improvements across the UNC system. Community colleges, state parks, local water and sewer systems and public-safety departments also will benefit.

In the weeks leading up to the March 15 primary election, Dubois attended a number of regional meetings to advocate for the bonds and what they mean to the future of public higher education in North Carolina.

Half of all UNC Charlotte students with declared majors are seeking degrees in science, technology, engineering or math – the so-called STEM fields that are considered crucial for America’s global competitiveness.

The Connect NC bonds will build or expand several STEM-related buildings across the UNC system, including the new science building here. “The real winners are the students who will come to UNC Charlotte and the employers who will benefit from their skills and knowledge,” DuBois said.