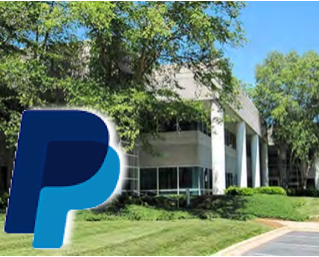 PayPal Inc., the digital-payments company, will open a Global Operations Center in University Research Park, the company announced on March 16. PayPal said it will create 400 new jobs and invest $3.6 million over the next 18 months at its new offices at 1000 Louis Rose Place.

PayPal will move into space at the 70,000 sf Environmental Way building that is being vacated by Internet marketing company Red Ventures, the Charlotte Business Journal reports. Red Ventures recently announced plans to expand its University Research Park operations and has leased space at the nearby Cambridge Corporate Center.

A boost for both banking and technology here

Founded in 1998, San Jose-based PayPal currently has 179 million active customer accounts that use the PayPal digital and mobile payments platform. Its technology enables people and businesses to make secure transactions with each other online, in person and via mobile device. PayPal’s global platform allows customers to get paid in more than 100 currencies. The company reported $9.2 billion in revenue for 2015.

“North Carolina is the ideal destination for innovation-based, worldwide companies like PayPal,” said Gov. Pat McCrory at a Charlotte Chamber event where the announcement was made. “Today’s announcement means that we can add another prominent name to the state’s growing list of technology businesses with major operations here.”

“We are excited and eager to join the Charlotte business community,” said John McCabe, senior vice president of Global Operations at PayPal. “With its strong ties to the financial community and technology savvy talent pool, Charlotte is an ideal fit for this new operations center.”

This will be PayPal’s 11th global operates center in the U.S. New positions at the operations center will include customer service, risk operations, engineering and technology and other staff. Wages will vary by position. The center will yield an annual payroll impact of nearly $20.4 million for Mecklenburg and surrounding counties.

The state Economic Investment Committee recently approved a Job Development Investment Grant (JDIG) for PayPal’s new operation here, including its pledge for 400 new jobs and facility improvements. Under the terms of the company’s grant, PayPal is eligible to receive up to $2,797,500 in total reimbursements over the 12-year life of the award.

The incentives to PayPal will also include $480,000 in community college training and contributions from Charlotte and Mecklenburg County.