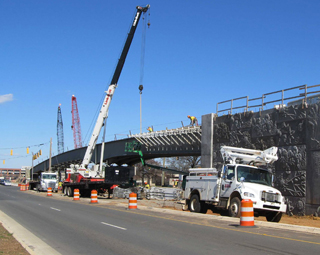 The flurry of CATS email, Twitter and Facebook traffic alerts last week all had the same basic message – stay clear of North Tryon Street in University City, ’cause we’re making a light-rail line!

The $1.16 billion construction of the 9.3-mile LYNX Blue Line Extension has shifted into a new phase. With most of the widening of North Tryon Street’s median now finished, crews have begun erecting bridges and building the actual light-rail line in the Tryon median between Old Concord Road and the UNC Charlotte campus just north of Institute Circle.

If all work continues as planned, the new light-rail line will begin service in August 2017.

Most of the steel arches have also been placed, with crews now working on the long span that will carry the tracks of Harris Boulevard.

The nearly completed steel arch has transformed the view for thousands of motorists as they come up the long hill from University City Boulevard.

Bridges with a view

Two even bigger bridges have been rising mostly out of the driving public’s view. CATS recently brought in the largest mobile crane in America to lift massive steel beams into place above Craighead Road. That bridge will extend 735 feet and tower 53 feet above the ground when finished.

The final bridge before the UNC Charlotte campus terminus is a 550-foot steel span over Toby Creek and protected wetlands.

A different sort of bridge was put into place in February – the pedestrian bridge linking the JW Clay Boulevard station platform to the nearby Clay Boulevard parking deck. Transit users can climb stairs or take an elevator from the station platform in the Tryon Street median. UNC Charlotte and Carolinas Healthcare are preparing to build a similar elevated walkway to the north side of North Tryon Street.

Transit-oriented development has been a major selling point of the original Blue Line to south Charlotte as well as the new Blue Line Extension to University City and UNC Charlotte.

The Charlotte Observer recently published an extensive article on the many other developments being planned along the line. READ THE ARTICLE

Stay in touch with BLE progress