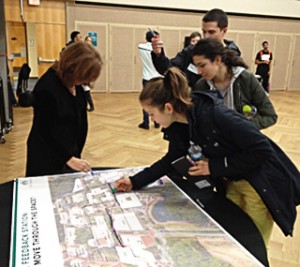 Dozens of students texted, scrawled, sketched and stuck circles on posters for more than hour on Feb. 9 at the UNC Charlotte Cone Center. You are invited to do so, too, on Feb. 22, as planners seek ideas for reinventing Belk Plaza – the longtime home of the late, great Belk Tower.

The 142-foot tower dominated a green square in central campus for 45 years before being removed in January after engineers determined that the aging structure posed a safety risk. Now the university is exploring new uses for the acre of lawn and crisscrossing sidewalks.

“We envision a functional and aesthetically pleasing area that will be open and inviting and that will provide a gathering place for both planned and unplanned events,” Chancellor Philip Dubois said last fall in an email to the university community about plans for Belk Plaza.

Dubois has appointed a 14-member committee from the campus and community to help guide the process and hired LandDesign, a Charlotte-based urban design and landscape architecture firm, to gather ideas and make recommendations.

Monday’s 2-hour Belk Plaza Public Forum at the Cone Center and a second one of Feb. 22 offer opportunities for students and the broader community to see how other campuses use open space and invite feedback on what might work best at Belk Plaza.

LandDesign’s conceptual plan for the plaza will be presented at the final forum, on April 4. The firm will develop a final plan for approval by the chancellor and UNC Charlotte Board of Trustees by mid-2016.

Richard Petersheim, a partner and senior landscape architect at LandDesign, opened Monday’s forum with a quick overview of the activities about to take place and the significance of the students’ contributions in creating a new vision for Belk Plaza.

“This place resonates with memories, and this place will make future memories,” Petersheim told the group.

Those future memories will likely be shaped by the ideas provided at these forums and incorporated in new plans for Belk Plaza. Once at the center of campus, Belk Plaza now serves mainly as a “pass-through” for students heading elsewhere, Petersheim said.

“Belk Plaza has very few friction points,” he said – no “stickiness” to make people want to linger. But with the right ideas, this could be a place like Harvard Yard, “where you walk onto campus and say, ‘Yeah, that’s the center!'”

Perhaps Belk Plaza should become an active space with outdoor dining, cafes and hard surfaces that provide space for food vendors and pop-in merchants, he suggested. Or perhaps the plaza should stay quiet and beautiful. “That’s what we are trying to assess from people here and from the university.”

For the next hour or so, students moved among several feedback stations. At one, featuring a large campus map, participants were asked to draw their typical starting point and destination when they pass through Belk Plaza.

At a second, people could view survey questions about the plaza on one large screen, such as “What uses could you envision that would activate the plaza?” text their answers, and then watch their data update survey results on a second large screen.

At another, students studied dozens of images of campus quads and greens and then used sticky circles to “vote” for ones they’d like (green) or dislike (orange) replicated at Belk Plaza.

Among the winners – an open lawn with shade trees (like Harvard Yard), and a gently sloping raised grassy area that could serve as informal seating for performances.

Among the losers – A treeless green lawn with crisscrossing sidewalks and no shade.

Learn more and get details on forums 2-3

Learn more about the process for reinventing Belk Plaza at BelkPlaza.uncc.edu.

The public is invited to take part in two upcoming forums. Both will take place 4-6 pm in the Lucas Room at Cone University Center. Parking is available at the adjacent Cone Parking Deck.