Policing in the time of hyper-change 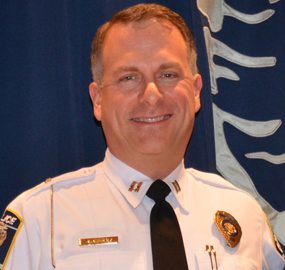 Hyper-change is transforming Charlotte and bringing new challenges to public safety, police division Commander Brian Foley told the Chamber’s University City Chapter at its January luncheon. Fortunately, meeting those challenges is as simple as an open mind, a ready ear, speed-dial and consistency: “Communicate. It’s one of the best things we can do to keep you and your employees safe.”

A student of change

As a lieutenant in the North Division, Foley witnessed the explosive changes that followed the opening of Northlake Mall. One of his responses was to launch a coalition of community leaders and activists to share experiences and build relationships.

At January’s Chamber luncheon, Foley reflected on the changes underway here and the importance of consistent, effective communication in keeping us safe.

Foley lives near the existing LYNX Blue line and witnessed the wave of new development that followed its opening eight years ago. “The impact of light rail is not going to be just in University City,” he predicted. “Its impact stretches across the city and the whole region.”

Other changes that affect policing here include businesses with security gates (can police get access quickly in an emergency?), apartment buildings with single locked entrances (traditional ways of spotting people lurking outside or committing crimes are less effective) and 11,000 young adults living on or within a mile of the UNC Charlotte campus. UNC Charlotte has more than 50 sworn police officers and shared policing responsibility for a 1-mile-wide zone beyond the campus.

“Police Chief Jeff Baker from UNC Charlotte is here, too,” Foley told the group. “I am learning the challenges of policing a major university.” With future enrollment projected at 35,000 students, “UNC Charlotte is going to be the largest university in the (UNC) system.”

Communication – still the No. 1 tool

Charlotte has gone through a decade of declining crime rates even as the city has absorbed hundreds of thousands of new residents, Foley said.

All of us can help maintain a safe University City, whether we live here or manage businesses. The keys:

If you have safety questions or concerns, talk to the police. For instance, invite police to visit your business before you have a problem. Then if something does go wrong, police won’t lose crucial time finding their way around.

Share your good ideas. If you have an idea for how your group or business can work with police to improve the quality of life or reduce crime, we’d love to hear from you.

Stay connected with us. Police want to build relationships so we can explain to you what we do and why we do it. “We need the opportunity to talk with you on a regular basis. We’re your partners.”