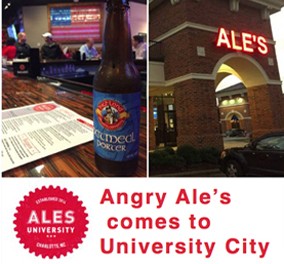 The original Angry Ale’s has operated on Montford Drive for 15 years. Both locations are owned by longtime Charlotte restaurateur Andy Henson.

The new Ale’s University, located near the Flying Saucer, is a full-service restaurant and bar offering 15 draught beers on tap, many of them from regional breweries. Catch the 49ers and other games on 75-inch TVs. A 1,500-square-foot covered patio is under construction.

Early reviews on the dining website Yelp.com praise the drink specials and food selection. “Great to have a real neighborhood bar in the area – and it’s from the guys that run the always fun Angry Ales on Montford Drive, “Rich” posted two weeks ago.