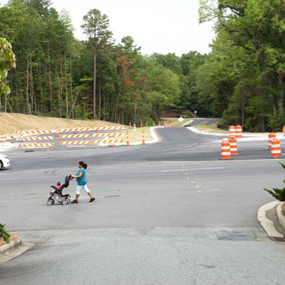 Just like the rest of University City, UNC Charlotte is undergoing numerous road and light-rail improvements. Two of the projects should make significant improvements to getting on and off campus and moving across it – the signalized entrance at Cameron Boulevard and NC 49, and the realignment of Phillips Road so that it flows into Craver Road at a new intersection with Cameron Boulevard.

The Cameron-NC 49 traffic light will give the campus its second left-turn exit onto University City Boulevard and also provide safe bike and pedestrian travel between the growing South Village residential area and nearby Town Center Plaza.

The Blue Line Extension will end here beside the North Campus.

If you haven’t visited campus by way of North Tryon Street recently, you are in for a huge surprise and possibly some traffic delays. Construction of the light-rail line between UNC Charlotte and Center City has transformed North Tryon and part of campus into a swath of barrels, barricades, beeping construction vehicles and long stretches of dust.

The $1.2 billion project is on schedule for completion in spring 2017. Once the trains start running, passengers boarding at campus will reach downtown in about 22 minutes. The existing Blue Line continues for another 10 miles nearly to Pineville.

Among the landmarks you’ll spot this fall along North Tryon and on campus:

Learn all about Charlotte’s Blue Line Extension at the project website.