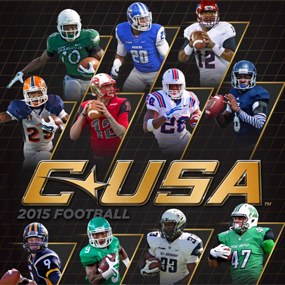 Year 3 of 49ers Football is going to be the best yet! The team jumps to Division 1 play in Conference USA in just its third season under head coach Brad Lambert. The 49ers open their season on Friday, Sept. 4, in a nationally televised game at Georgia State.

“This is another great step for our program,” said coach Brad Lambert. “We’re excited to have our first game in the FBS on national television. This works out great for Niner Nation — for those who will make the trip to Atlanta and those who will catch us on ESPNU.” Game time is 3:30 p.m.

Hot Times in the Hometown, Too!

The Hauser Alumni Pavilion should be finished by late September.

A big, open building taking shape beside Toby Creek will soon rock with pre- and post-game festivities. The Hauser Alumni Pavilion being built this summer near Phillips Road should be ready for hundreds of tailgating alumni just in time for the Sept. 26 game vs. The Florida Atlantic Owls.

The facility will have about 8,000 square feet of covered space including rest rooms. It’s just a short walk up the hill to Jerry Richardson Stadium. Several other sports venues are nearby, too.

Get your tickets now!

Additional ticket options remain on sale for fans looking to purchase tickets to the full season or partial season of 49ers football, as well as bring a group out to Jerry Richardson Stadium. Tickets are available at the 49ers Online Ticket Office located at Charlotte49ers.com.

Fans may also purchase tickets by visiting the 49ers Athletic Ticket Office located at the Barnhardt Student Activity Center or by calling 704.687.4949. Ticket office hours are Monday-Friday, 8 am-5 pm.