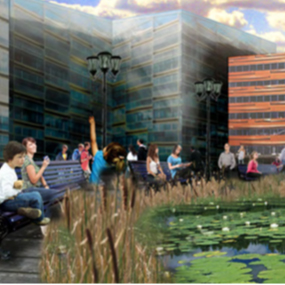 One of University City’s great assets is the creative energy of UNC Charlotte. That creativity took center stage last week, as Urban Design graduate students presented their exploration into landscape urbanism – with University City as their focus. Imagine how our urban center might develop if open space was as well planned as the buildings. The students did, with fascinating results.

The students made their presentation at the monthly meeting of the Civic By Design Center, which seeks to elevate the quality of our region’s built environment and to promote public participation in creating it.

The presentation at the Levine Museum of the New South drew several architects and people involved with development, as well as University City residents. Lee opened the program with a quick overview of the project, which is being carried out in cooperation with the university, Mecklenburg Parks and Recreation, and University City partners.

“This is an attempt to explore new, innovative ways to use open spaces as the driver for urban transformation,” he said. “Instead of using only buildings and other artifacts, we should also see open space as a building block for creating a great city.”

One example, he said, is the famous High Line in New York City where the community turned an unused elevated railway into a park stretching more than a mile above city streets. The High Line has been very successful in bringing green back to the area while triggering new development, he said.

Lee’s Urban Design students spent their spring semester exploring how to use green space as a catalyst for place-making, with University City’s Municipal Service District as their testing ground. The process began with a look at University City’s opportunities for green development, including its greenways, tree cover and the coming light-rail line, as well as constraints such as the major highways that create barriers to walkability.

The students then created an overall vision – to plan University City’s urban future around a greatly expanded green network of parks, trails and public spaces. With that framework, teams of students developed a vision for five segments of the 5.7-square-mile Municipal Service District, including the research park, the “Gateway” near the University City Boulevard Station transit and “University Playground,” their name for a recreated University Place.

Homes in the Research Park?

The vision for University Place includes three green activity centers connected by green paths and new bridges across the lake.

For example, students Jaquasha Colon and Ojah Vasser hope to knit together a much more intensely developed – and livable – University Research Park with additional greenways, reduced surface parking, a grid of streets, housing, shops and parking decks topped with gardens.

At the end of the presentation, several audience members offered encouragement and praise for the students’ work. Wil Russell with Rodgers Builders said he loved the idea of using greenway corridors to connect buildings.

Darlene Heater, executive director of University City Partners, said that when UCP approached the university for this project, she asked that the students explore how parks and natural areas might work 50 years from now. Yet some of the concepts they have proposed are already finding interest, she said, such as using greenways to connect office buildings and creating attractive water features to handle stormwater retention.

Tedd Duncan, a senior associate with the international design and consulting firm, Stantec, encouraged the students to take small steps. “The key is to have small successes. Even Birkdale Village doesn’t have a lot of space,” he said, referring to the well-regarded mixed-use community in Huntersville. “But when you have that one success, people remember it. It’s iconic.”