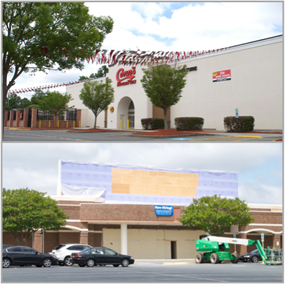 Conn's and Gabe's are moving into large retail spaces.

Two national retailers are opening in University City centers. Gabe’s, a fashion and housewares discounter, is remodeling the space next to Value City Furniture at the Commons at Chancellor Park. Conn’s, an electronics, appliance and furniture chain, opened recently at University Plaza, the new retail center taking shape in the former University Place Walmart building.

Formerly known as Gabriel Brothers, Gabe’s is based in Morganton, W.Va., and operates 47 Gabe’s stores including new stores in Gastonia and Greensboro. The privately held fashion retailer also operates more than 60 Rugged Wearhouse stores, including four in the Charlotte area.

Conn’s describes itself as a specialty retailer selling furniture, mattresses, home appliances and a variety of consumer electronics ranging from HD TVs to computers. The chain also offers flexible, in-house credit options and other financing options.

Conn’s operates about 90 retail locations across the South and Southwest. It opened a 300,000-square-foot distribution center in Charlotte in 2013 as part of its plans to expand into the Carolinas. The new Conn’s store at University Place is the Texas retailer’s third store in North Carolina and second in Charlotte. Conn’s occupies about 46,000 square feet of space at University Plaza.