I-485 to open June 5 in University City with innovative design, 70mph speed 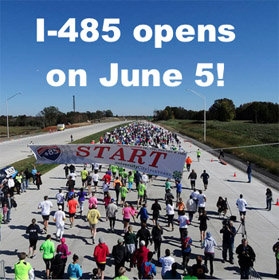 Hundreds of runners participate in the I-485 MADD Dash last December. Cars and trucks will flow here starting June 5.

Although everyone at last week’s City Hall Meeting at the Oasis Shriners hall already had heard, NC transportation spokesman Warren Cooksey couldn’t resist starting his report on state projects with the long-awaited good news: The last piece of the I-485 Charlotte Outer Belt will open on June 5.

The opening of the last stretch of roadway, through University City, marks the completion of Charlotte’s 67-mile belt road 26 years and 11 months after the project’s 1988 groundbreaking. Waiting does have its benefits: The 5.7-mile final leg in University City will open with four traffic lanes  in each direction vs. 2 lanes on the early sections of roadway.

Our stretch of the Outer Belt also has some unique design features.

The state also announced last week that it is raising the speed limit on the entire outer belt from 65 mph to 70 mph. A NC Transportation Department news release said that the increase reflects the highway’s design, which can safely accommodate the higher speed, as well as the fact that most drivers already travel the road at 70-75 mph.