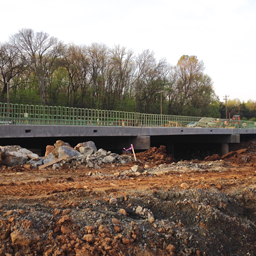 The southbound bridge on North Tryon Street in early April

Just in time for the Coca Cola 600, two-way traffic appears ready to resume on North Tryon Street at the Mallard Creek bridges. The NC Transportation Department says that southbound traffic should start flowing early on Friday, May 22. The opening comes just as Charlotte Motor Speedway revs up for three days of races.

“A lot of work remains to be completed, but we have made provisions with our contractor to make this happen and we are very optimistic we can meet the schedule,” NC engineer Brett Canipe wrote in an email earlier this week to University City Partners.

The timing couldn’t better for race fans. The speedway will host the NOS Energy Circle K Outlaw Showdown on May 22, The Hisense 300 NASCAR Sprint Cup Series race on May 23 and the Coca Cola 600 on Sunday, May 24. That race drew more than 140,000 fans last year, and North Tryon Street is a major way in and out of the Speedway district.

The state is replacing the two-lane bridges over Mallard Creek and closed the southbound lanes in October to replace that bridge first. Transportation Department spokesman Jordan-Ashley Walker said that plans call for the northbound bridge to close around June 1. This time, however, a detour will not be necessary.

The new southbound bridge is wide enough to handle two lanes of traffic in each direction while workers build the new northbound bridge. Walker said that the state is coordinating its project with both Charlotte Motor Speedway and the city of Charlotte, which is building the LYNX light-rail line along North Tryon Street to the UNC Charlotte campus. “Race Weekend is important to the whole area,” Walker said.